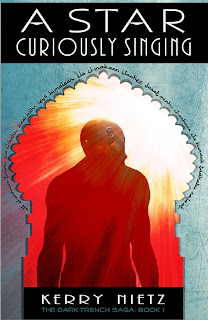 I almost feel like what I'm about to write should be read by Don LaFontaine. But here we go . . .

In a world where Shari'a law is the rule and norm, SandFly is a debugger. He has an implant in his brain that allows him to access computer systems and robots, fixing and reprogramming them from within. But the implant also inhibits him, blocking "bad" thoughts and actions from ever forming.

His master sends him out on a mission to work on a robot that was part of the first interstellar flight to an alien star. On the trip, something caused the robot to tear itself to pieces. SandFly's job is to find out what that was.

The problem is, if he does, he puts himself and the whole world in jeopardy.

That's the plot of A Star Curiously Singing by Kerry Nietz.

I really enjoyed this book. Nietz puts together a very intricate world with its own terminology, rules, and mores and employs it effectively. At first, I had a little bit of trouble digesting it all. We dive in with both feet into SandFly's world, which has a lot of flash and jargon to it. Getting used to the ideas of debuggers, the stream, downriders, and so on and so forth. But once I got into it, everything flowed quite nicely. I especially appreciated Nietz's made up "cursing." Crichton and clarke!

The dystopian feel to it worked as well. Neitz's posited future, one where a certain monotheistic religion basically conquers the world, felt plausible and fully realized. The only thing that bothered me about that was referring to people as "Abduls." It was so constant it almost felt unnecessarily disrespectful. I understood the reasoning toward the end when Neitz explained it, but by then, I wonder if other readers might not be turned off.

The interesting thing is that if you read the backcover copy of the book (which I did not summarize completely in my "Mr. Movie Voice" business above), you pretty much will know the whole plot. It doesn't stray that much from it. But the really cool thing is that Neitz keeps you going. It's a fun read and a wild ride through the future. I'm looking forward to what I assume will be a series following the further adventures of SandFly.
Posted by John at 8:13 PM