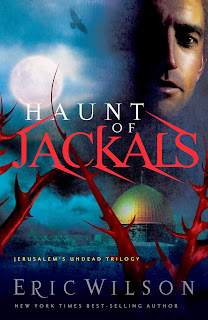 This month, we're taking a look at Haunt of Jackals by Eric Wilson, the second book in the Jerusalem Undead Trilogy.

The story picks up pretty much where the first book left off. Regina Lazarescu, or "Gina," has faced off against the demonic Collectors in the hills of Romania and come out battered but victorious. Her "partner in crime," Cal Nichols, a disgraced member of the Nistarim, sets her up with a new identity and a new life in a place he hopes will be far from danger.

But the Collectors aren't done with the Nistarim yet. One half of the Akeldama cluster have retreated to the birthplace of Judas Iscariot to set a horrific plan in motion. The other half are focused on finding Natira, a member of their cluster who has been missing for centuries. Before long, all the threads converge in one gigantic clash that will change Gina's life forever, especially as a new player emerges on the scene.

I'll say this up front: I'm not a fan of vampire stories. I don't care for the movies, I despised Twilight, and I wasn't exactly a fan of the first book in this trilogy. I did my best to keep an open mind as I read the second book.

For the most part, I enjoyed it. Wilson is extremely creative and pulls a lot of obscure Scriptural threads together as he weaves his story. It works . . . for the most part. There were a few times when I was left scratching my head. For example, I didn't see any significance in the fact that the remains of Nehustan, Moses's bronze serpent, is a part of Gina's dagger. And Wilson's retelling of a contemporary American myth seemed a bit too over-the-top to me. That's just my opinion, though, and others might disagree.

The other major problem I had (and it took me until the second book to really put my finger on it) is the "voice" of the Akeldama Collectors. I get that they live in the modern world and will naturally begin to adapt themselves to the patterns of this world. My problem is this: these are the reanimated corpses of first century people possessed by demonic forces. Personally, I would think that their internal voices wouldn't sound so . . . well, normal. Human. There should be a touch of otherworldliness to them that didn't seem present.

But again, these are my opinions about a book that sits in a sub-genre of speculative fiction that I normally don't care for. Take what I've written with a grain of salt.

Nice review. I agreed with much of it. However, I love vampire stories LOL. But these are not your Hollywood Vamps, huh?

I'm not such a fan of the first book, either, and am iffy about the second book, but the guy's got talent and imagination. And I think the world could do without Twilight and its sequels -- but that's just me.

I wasn't a fan of the vampire voices either, although it was the short-lived voice of the blackbird that really lost me. I just don't think a blackbird would sound like a self-absorbed, shallow human female. Especially not while possessed by an ancient demonic spirit.

And actually, I had the same problem with Cal. Supposedly this is a man who has been living for two thousand years, plus a lifetime before that. I would expect more wisdom, more maturity, a much different way of viewing life than would come from most people. But he didn't strike me that way.

That's interesting that you didn't find the voices of the Collectors quite believable. I've only read the first chapter of HOJ, but I caught a clue even then about this voice problem. I didn't realize it would go through the whole book.

Ah well ... maybe we need to think of it as if someone has translated their words and thoughts to our modern world to help us understand them better.

p.s. John ... you should open up your comments policy to allow other forms of I.D. ... not necessarily anonymous, but at least name/url, open id, etc... not everyone has a google account.