I'm not the only one!

Okay, if you aren't subscribed to Entertainment Weekly, go out and find a current issue (by current, I mean the one dated March 4, 2005). Don't worry. I'll wait.

Now, turn to the back page and read Mr. Stephen King's essay on prescription drug ads. I have to say, my hat is off to Mr. King. My rant about prescription drugs only factored in the economic aspects of these ludicrous ads. Mr. King brings up a much more important point: the health factor.

Mr. King cites the fact that drugs like Vioxx are causing heart attacks, something that probably should have been tested and researched before the drug companies went on a mad spending spree in TV land (not to be confused with the Nickolodeon spin-off channel). I can picture what the executive boardroom must have been like:

EXEC #1 -- So, are we ready to start up a new ad campaign for our latest product?

EXEC #2 -- Oh yeah. We secured the rights to a Beatles song and found a bunch of models who don't actually use our product to swear that it changed their lives.

EXEC #3 -- But what about these results that came in from our testing facility? Shouldn't we make sure this product is as safe as possible before we start to mass market it?

At this point, I suspect the other two execs stared at their colleague in stunned silence while the CEO of the drug company fantasized about reenacting the Al Capone baseball bat scene from The Untouchables.

Okay, so maybe I have an overactive imagination, but enough is enough! Have you written your representative yet? These drug companies are clearly out of control, especially if people are dying from drugs that they're trying to shove down our throats.

In a related matter, I did hear from my representative, the honorable Gil Gutknecht. I suspect that Mr. Gutknecht didn't even read my letter. He claims to have, but he....

Well, wait, I'll just post the letter here on the blog and let you judge for yourselves.
Posted by John at 11:35 PM No comments:

Condescension can save the environment!

So I want to make a big Hollywood blockbuster. Let's see if I have everything I need:

My wife and I watched The Day After Tomorrow the other night. It was a good Hollywood blockbuster (by which, I was entertained by the special effects. The story, which has long been acknowledged as being completely unscientific, is another story), but at the end, I was a bit miffed at Roland Emmerich.

Why? Well, Mr. Emmerich seems to think that everyone who watched the movie he produced, directed, and wrote is some kind of idiot. See, The Day After Tomorrow has a moral to its story:

GLOBAL WARMING CAN HURT OUR ENVIRONMENT!

No kidding. I kind of knew that already. But Mr. Emmerich felt the best way to pass this information along to us was by making this movie. Fair enough. He did an adequate job of setting up his premise at the environmental summit set in New Dehli. When our hero Jack Hall (Dennis Quaid) explains things to the good people at NOAA, Mr. Emmerich was pushing the boundary. But then, when the Vice President delivers his little speech at the end of the movie, I wanted to scream, "I get it! I'm not stupid! Global warming is bad!"

Apparently Mr. Emmerich thought that the majority of the people watching his flick would be so brain dead, we wouldn't catch that moral within the first half-hour. So he had to pull out the "moral stick" and beat us over the head with it at the end of the film.

Here's an idea, Mr. Emmerich: give your audience a little credit. While we may be sucked into your shoddy storytelling by all the eye-candy and killer frost, we can pick up on what message you're trying to send us without your condescending help.

It's a problem that seems to afflict Hollywood and those in charge of producing entertainment. Those of us who are "out there" (read, people who don't get their names in TV or movie credits for some reason or another) are stupid and need to be talked down to at every moment.

The same thing happens in TV. TV execs keep shoveling the same tired stereotypes and hackneyed storylines at us, and then they're shocked when an innovative show like Desperate Housewives or Lost captures our attention.

Here's a message for any Hollywood type who may have stumbled into the Least Read Blog: Give us some credit. Maybe we'll take you more seriously then.

One of my favorite cartoon websites is Homestar Runner. More specifically, I like the e-mails written by Strong Bad. As my wife would say, it's "boy humor." Very silly stuff. I mean, just check out the special director's cut of Strong Bad's action movie, "Dangeresque 1: Dangeresque, too?" to see what I mean.

I was clued in to Strong Bad and his awesome e-mails by my soon-to-be brother-in-law, Chris. Cool guy.

Anyway, recently, Chris sent me a picture of himself dressed up as Strong Bad. I nearly fell out of my chair laughing: 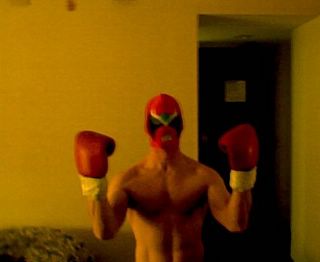 Naturally, I had to know why he dressed up like that. He explained it was for a convention he attended in Detroit. He sent me other pictures and this article about the convention. He's even mentioned in the article not once, but three times!

But by far, my favorite picture he sent is this one: 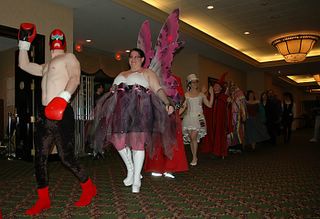 I love it! I absolutely love it!

And Chris .... you should know better than to send me pictures of yourself dressed up as cartoon characters. :)
Posted by John at 10:54 PM 1 comment:

Okay, so Jill (my darling wife) and I are doing dishes this evening and we have "King of the Hill" on in the background. Toward the end of the show, a commercial comes on for a prescription drug that people can take for their asthma.

Toward the end of the commercial, the voice-over guy starts listing off the reasons why you wouldn't want to take this drug, the possible side-effects, and something about not taking it if you're going in for surgery anytime soon.

And I thought, Oh, for crying out loud! When will it end?

I don't know about you, but I am sick and tired of all these prescription drug commercials on TV and in the magazine. I think these drug commercials are bad news, and here's the reason why:

1) It encourages people to self-diagnose. These commercials describe conditions that you might or might not have, describing the symptoms, and then suggesting a treatment plan (which always involves their product, naturally). If I were a doctor, I would be sick of conversations that involve my patient diagnosing him- or herself based on commercials.

PATIENT: Doctor, I believe I have Sorvidalertan Syndrome, and I believe the proper course of treatment is a healthy dose of chlormydioxyhydrate-D, or "Chlori-O," as it's also called. I understand that the possible side effects include dizziness, constipation, and bleeding from the armpits, but I'm just so worried about the SS, I have to take it now!

DOCTOR: Really? You think you have SS? What makes you think that?

PATIENT: Well, my TV told me that's what it means when I can't breathe and my face turns purple.

DOCTOR: No, that means that your collar is two sizes too small. Next patient!

Now, I ask you, who should be deciding a patient's treatment regimen? A doctor, who has spent years training to make such decisions, diagnoses, and prescriptions? Or an untrained layman whose only source of info is a commercial featuring cartoon characters watching badly drawn neurons misfiring?

2) It drives up the drug prices. Why do you think our drug prices are so high? It's not for the orange, semi-transparent bottles, I'll tell you that much. I mean, this is basic, common sense.

Let's say that it costs $2.5 million to produce a given drug for a year. Then let's say that you spend $2.5 million on an ad campaign that includes a spot on the Superbowl. Suddenly, it's going to take twice as much money to turn a profit. And how are you going to make the extra money? Hmmmmm .... let me think about it!

So what's the solution? I think I have an idea. For the common good, to help rein in the rampant drug prices, let's ban prescription drug advertising from television, kind of like what we do with cigarettes. That way, the drug companies don't have to pump untold millions into ridiculous advertising, and they can pass the savings on to us.

Use the links below to find and write to your Representatives and Senators and urge them to ban drug advertising from TV. I already have:

Write your Senators
Posted by John at 8:30 PM No comments: