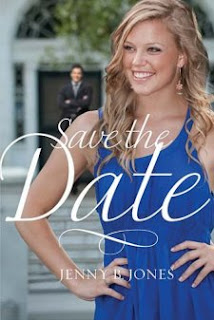 Every now and then, I like to take a stroll outside of my geeky genres and read something a little different. So a few weeks ago, I decided to dip my toe into the waters of romance.

Actually, I’ve wanted to read something by Jenny B. Jones for a while now. Jones usually writes Christian Young Adult books and I’ve heard that she’s hilarious (I’ve never had the pleasure of meeting her officially, although I have seen her in the halls of my writing conferences). When I heard that she decided to publish an “adult” novel, I figured it might be worth checking out. Hence why I bought Save the Date.

Lucy is a geeky girl who runs a non-profit organization that helps rescue young women who are too old for the foster care system but too young to make it on their own. Alex Sinclair, a former professional quarterback and heir to a hotel fortune, is running for the Senate. You wouldn’t think the two of them would ever need the other’s help, but they do.

See, Lucy’s non-profit is running out of money and she’s in danger of losing her facilities. Alex is drowning in the polls and needs something to boost his numbers. So when the two of them run into each other at a gala hosted by Alex’s parents and the press jump to the conclusion that they’re dating, a revelation that helps Alex’s campaign, Alex hatches a plan: if Lucy will pretend to be his fiancé up through the election, he’ll pay her the money she needs to keep her charity going.

This was an enjoyable read, a lot of fun. Like I said, it’s a bit outside of my wheelhouse, so to speak, but I still liked it enough to polish it off in a day or two. The faith content is strong and the writing is fun. The fact that Lucy is a geek particularly sealed the deal for me. So if you're a fan of the romantic genre, this might be one for you.
Posted by John at 11:30 AM 2 comments:

The bane of my existence right now is Kickstarter. I actually have to stay off of it most days because I know that I'm going to find something that I like and I'll want to dump some money into supporting it. My particular weaknesses are the games, both board and computer. I want to get them all!

Case in point: FTL: Faster than Light. On the surface, it looks like a throwback to "simpler times." The graphics aren't complex. Neither is the sound. And yet, this game is a lot of addicting fun. 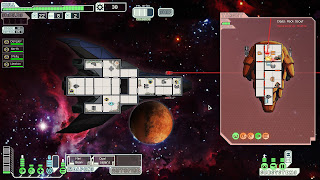 You are in charge of a starship, one with a vital mission. The Rebels are going to wipe out your government, but you have the battle plans that reveal the weakness of their massive flagship. You must get your plucky crew across a randomly generated galaxy to do battle with the flagship. While you go, you collect scrap, missiles, drone parts, and fuel. You upgrade your ship with new systems and weapons. You pick up Sounds easy? Guess again.

This game is hard. Extremely hard. As in, I've played this game dozens of times and only beaten it three or four times, and each time, it's surprised me. The enemy gets progressively harder, but the final boss is a beast. Worse, there's no way to save the game to go back if you make a mistake. There is a brutal learning curve to this game and it is still a blast. Ever since I backed FTL on Kickstarter, I've had access to the beta. The additional features that have snuck into the game as they worked on it has made it awesome. This is a great game and a challenging one to boot. It's worth the investment.
Posted by John at 9:06 PM 3 comments: