Here's An Idea For Hollywood

So Jill and I went to see Fantastic Four tonight, and on the way to Mankato, I started thinking about the offerings from Hollywood for this summer. And I know that people have said this before, but why is Hollywood offering us so many remakes and retreads? Just about every movie this summer seems to be a remake of something else. Charlie and the Chocolate Factory, The Dukes of Hazzard, Bewitched, War of the Worlds , The Longest Yard, King Kong (which, I know, comes out in December, but it's still a remake), the list could go on and on and on....

Which makes me wonder. Why on earth would Hollywood keep remaking successful and/or critically acclaimed movies? I know, I know, it's the money and it's really easy to do (I mean, all the heavy lifting like story and plot are out of the way), but it seems to be an awful risk.

I mean, take a look at the flack that Tim Burton's gotten for Charlie. There are those die hard fans of the old film who will probably hate the remake or revisioning or whatever you want to call it. People are crying bloody murder because they're so worried that Burton is going to destroy a classic film, which is always a danger when you tackle any remake.

And really, remaking a successful film is a lose/lose proposition. At least, it seems like it would be to me. First of all, you have to fight to get the rights to the original movie. You have to beg and plead with whoever owns it just to get a crack at it. Then you have to dodge all the critical bullets that will fly your way while you're filming.

Worse, if your remake is a success, I don't think people really give you that much credit. After all, you just built on the shoulders of giants. It wasn't your success, it was because the story was too big or too powerful for you to screw up. And if your remake flops, well then, you're just a double loser because you couldn't succeed where someone else did.

That's why I think Hollywood is going about things all wrong when it comes to remakes. Why remake the classics? Why spend the money to redo something that people love and cherish? (George Lucas, I'm talking to you too!) Why not go out on a limb and, say, redo a flop?

I'm serious! Why not remake the movies that were just horrible to begin with? Instead of remaking Charlie and the Chocolate Factory, why doesn't Tim Burton try to fix Plan 9 From Outer Space ? Instead of redoing a classic, why not try to make the plot of Manos: The Hands of Fate make sense? I mean, Hollywood produces a lot more flops than they do hits each year. Why don't filmmakers try to go back and fix the old flops? If they need a list, they could just buy an episode guide for Mystery Science Theater 3000. That should give you plenty of material to work with. Hundreds of movies, and none of them with any merit whatsoever.

Think about it. Unlike remaking a classic, critically and/or fan acclaimed movie, remaking a dud is a win/win proposition. If your remake is a hit, you get to bask in the adulations of the fans and you'll look like a genius because you were able to make a cinematic turd shine like gold. And if your remake flops, you can just point out that the story sucked the first time around and so it's really not your fault.

Don't believe me? I think someone in Hollywood has already tried this. I keep seeing the trailers for that cloning nightmare movie, The Island, and I have to say, it looks really, really familiar. Maybe because in 1979, some guy made a movie called Parts: The Clonus Horror, about a group of clones that live in an isolated area, kept on hand in case their parts are needed in the real world. If they need to be harvested, they're told they're going to some sort of paradise. Only one of the clones escapes, yada yada yada. Sound familiar now? Someone is trying to do a dud remake. I hope they succeed. I really do.

Hollywood could learn a lesson. C'mon, guys and gals, get with it! Ishtar awaits! Roger Corman's many lousy endeavors need salvaging! Stop taking the easy road, and tackle something challenging.

Just one request from the peanut gallery. Don't mess with Gigli. Some things are just better left dead.
Posted by John at 10:55 PM 2 comments:

That's right. Even though I have no authority to do so, I am hereby surrendering the U.S. to al-Qaeda.

I mean, that's what Osama wants us to do, right? That's why he keeps sending his minions out to strike at us. That's why there were these terror attacks in London, right?

(Okay, at this point, we don't know for sure who did it, but given the similarities to other al-Qaeda attacks, I'm not really willing to bet against that)

They keep on striking at us because we're such big bullies and we're messing with the Middle East. Therefore, we should just pull all of our troops out Iraq so it can collapse into anarchic chaos and so extremist imams can set up a ruthless theocracy. We'll call it Taliban West.

I'm sure that's what some of the pundits out there are going to say in light of what happened in London. We should stop provoking the radical Muslim terrorists and try to play nice with them. Get out of Iraq. Leave Afghanistan alone. Stop hunting for Osama. Then we'll all be able to skip off into the sunset together.

I think that's a great idea.

No, I really do! Let's do just that. Let's give the terrorists exactly what they want. We'll get out of Iraq. That should stop all the attacks, right?

Well, no, I suppose not. After all, we're still the Great Satan, partially because we support Israel. So I guess to get them to stop the attacks, we'll have to go back on our word to our allies in the region and break a lot of different treaties and have them fend for themselves. Then they'll like us, right?

I'm guessing the answer will still be no. They'd still consider us the Great Satan since we tend to project our culture throughout the world. We export our movies, our TV shows, our fashions, and oddly enough, people around the world adopt them and imitate us. That's part of the reason why the terrorists don't like us: they think we're corrupting their daughters and a bad influence on their sons. So we'll have to cut everyone off. No more American movies. No more Simpsons re-runs. No more foreign factories making jeans. Then we'll finally have peace, right?

Well ..... maybe not. After all, we'd still be a pretty tolerant country. We'd still allow people to be different heretical religions, to say whatever they want, no matter how blasphemous it is. Our women would still be able to show a scandalous amount of skin. Our churches would still be separate from the state. And to them, that just won't do. The only way they'll be happy and put away their bombs is if everyone in the world believes and dresses and speaks and acts just like them. And until that happens, they're going to want to attack people.

So that's it. If we want to see the violence end, we have to surrender the United States completely. Terrorists, come and get it. We'll let you set up a theocratic Muslim government however you see fit. Women, report to your local town halls so you can get your burqas. The rest of us religious types will have to learn Arabic and get our own copies of the Quran. 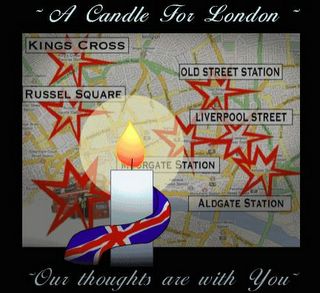 We stand with you in your time of trial.
Posted by John at 6:04 PM No comments: