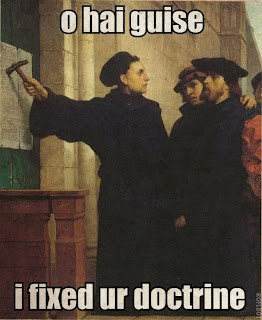 Wow, it's been an interesting week.

First of all, let's get down to official business: my Hive report. I'm still cautiously optimistic that I might be able to finish the first draft by the end of this month. By my rough estimation, I need to write at least three more chapters and an epilogue, and I've been averaging about a chapter a day. So we'll see. I've made predictions like this before and usually I've come up wrong.

But this week was pretty good, all told. I was able to write 6,804 words, bringing the grand total up to 80,399 words. That means I'll finish over-target, but that's okay in this case. I'm sure that the first rewrite will tone things down.

With that out of the way, let's talk some of the other fortuitous things that have happened. For starters, today marks my debut as a contributor at Speculative Faith, a blog dedicated to Christian speculative fiction. I'll be posting every other Wednesday. This week, by way of introduction, I told a little of my journey to publication, something I've never really done before. I'm not sure what future topics I'll talk about, but I'm thinking my obsession with telling stories with aliens in it has to come up at some point or another.

Last but certainly not least, this week also marked a major milestone for me: a book that I contributed to is available on Amazon! This is the first time this has happened. I've mentioned the book before: Spirited. As of right now, it's available as an e-book for the Kindle. I've heard that it'll be available for the Nook soon. Print copies won't be available until March (sorry to all the purists out there). But if you've got nine bucks to spare, the proceeds go to 826 National, a non-profit organization that offers free after-school tutoring, workshops, and in-school programs.

I feel like I'm always making excuses in these updates. I am writing. Really! I still feel the same "psychological progress" from last week. The story is moving forward. I'm just not adding that many words to Hive as I go.

So what's my excuse this week? More edits on Spirited, including a look at the galleys. That was a fun first for me. So was getting the cover for the book: 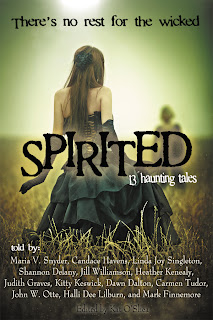 So there you go. I keep saying I want to step this up. I've even been secretly hoping I can finish this monster by the end of this month. But with only 12 days left, I'm thinking it might be a while longer. Time will tell. 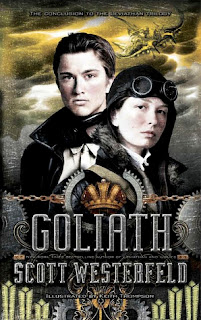 The valiant crew of the British airship Leviathan is back and this time, they're on a mission that could bring the war gripping the world to a sudden stop. A scientist from America claims that a weapon he's invented can easily bring every major world power to its knees. The British Admiralty believes the threat is real. So does Prince Alek, who continues to travel with the Darwinist forces. He feels responsible for the war in the first place, and he'll take any chance he can to end the destructive conflict. But Deryn Sharp, still masquerading as a boy, isn't so sure. But then, she's got a lot on her mind: her secret could unravel at any moment and worse, she's beginning to realize that she doesn't just see Alek as a colleague but as something more.

Can Alek and Deryn work together one last time to end the war? Or will the Clanker and Darwinist forces tear each other apart and take the world with them?

This was a fun read. The story was fast-paced and the action great. Once again, I loved Westerfield's imaginative recreation of a steampunk alternate history. His Darwinist creations, basically living vehicles, were fun to see in action, overshadowing the steam-driven war machines they faced. And the plot was superb as well, what with a certain famous American inventor claiming that he could end the war early.

How's that for trying to avoid spoilers?

It's not a major flaw. Even knowing what I know, I still was sucked in to the story, which came to a pretty satisfying conclusion. So if you haven't checked out this series, do so. You'll be entertained, that's for sure.
Posted by John at 7:10 AM No comments: 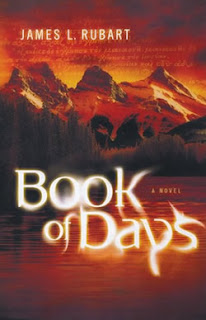 Cameron has had a rough life. He's lost his wife, Jessie. He lost his father, first to a disorder that robbed him of his memories, and then to death. But worst of all, Cameron is starting to lose his own memories and he worries that he too will die an early death. But both Jessie and his dad told him about the Book of Days, where God records the past, the future, everything. Cameron comes to believe that this Book holds the key to curing him, if only he can find it.

Ann is a woman looking for her past. And she has a lead, a good one. But if she follows it, she'll have to work with Cameron, a blast from her past that she just isn't ready for.

Both Cameron's and Ann's journeys will bring them to a small town in the Pacific Northwest, a town with its own secrets and people who will stand in their way. Will Ann find her past? Will Cameron have a future? Those answers are written in the Book of Days.

Okay, so my summary is a little over the top. Sue me.

It took me a little while to warm up to this book. I'm not exactly sure why that is. It was an enjoyable read with a few twists and turns to keep things interesting. Some things didn't sit well with me (for example, there's an unnamed villain and Rubart tries to drop hints that it's one person; it's pretty obvious it's not that person). But by and large, I enjoyed this book, especially after I got past a "critical mass" point, where I had gotten invested in the characters and stories. I especially appreciated the way Rubart portrayed Cameron's deteriorating condition. Very well done.

Naturally a book like this raises some questions about God's omniscience and how that relates to and interacts with human choice. Granted, this isn't a theology textbook, but I think Rubart did a good job of showing how both can work together. At least, I thought it was good. My colleagues who wear the funny shirts might disagree with me but hey, this wouldn't be the first time.

So all in all, a solid read and well done in my not-so-humble opinion.
Posted by John at 12:17 AM No comments:

So I was hoping to do better this week. Yeah, that didn't happen. But more on that in a minute.

Looking at the numbers, it doesn't look like I made a lot of progress. Over the past week, I added 4,611 words to Hive's total, bringing it to 70,221 words. But while the wordcount may not reflect a great deal of progress, I think I made psychological process. For a long time now, I've felt like I was spinning my wheels with this book. But in the past week, I've been able to move the story forward in some major leaps and bounds. Major revelations, some fun new (sort of) characters, and the players are getting in position for the final moves. I'm actually kind of optimistic that I can wrap this puppy up in the next few weeks.

So why didn't I do better? I blame The Night Queen, the short story that I wrote for a YA anthology. You remember, the one I wrote last week? Well, the editor for the anthology got back to me with a list of suggestions and edits and so I spent a day working on that (a day I had originally intended to pump up Hive's wordcount. Not that I'm complaining, just stating the fact). The great news is that I've officially been brought into the anthology!

It's called Spirited. Thirteen authors (including yours truly) have written spooky stories. The proceeds from this book will go to charity, specifically 826 National, an organization that promotes youth literacy.

Here's a book trailer in case you're curious about the book:

Pretty cool, huh? If you "Like" the book's Facebook page, you can stay up to date. Oh, and be sure to check out the cool contest that's being run right now. You can win an advance copy of the book by playing "Ghosthunter" with the authors' biographies. I mean, you've got a leg up now, right? You know at least one of them.
Posted by John at 10:58 PM No comments:

A few months back, I posted a video about a real life superhero named Phoenix Jones, a man who really gets dressed up in a costume and patrols the streets in an attempt to fight crime. Well, apparently Jones was arrested recently for pepper spraying a group he claims was fighting but police say were dancing.

I'm not going to take sides on this one, but I'm thinking if you can't tell the different between fighting and dancing, you probably should hang up your cape and cowl.
Posted by John at 9:15 AM No comments:

So things took kind of a curve this week.

For starters, I wasn't able to get as much work done on Hive as I would have liked. So this past weekend, I was really going to try to kick it into gear.

Then a fellow writer and friend of mine, Jill Williamson, notified me of an anthology looking for a short story. Did I have one lying around in a drawer somewhere that would fit the theme and the wordcount?

Unfortunately, no. But I figured I could crank one out in a few days. How much time did I have?

It was due today? Oh, shoot.

Actually, it wasn't all that bad. I spent two days writing it and then did a fast edit on it. It's probably a lot rougher than I would have normally liked, but I sent it to the editor today and we'll see what happens. The end result was a story called The Night Queen that clocked in at 5,526 words. I have no idea if it will get in or not. We'll just wait and see.

So Hive took a backseat this week, as you can tell from the wordcount. I only managed to write 1,445 words, bringing the grand total up to 65,610. Hopefully I can do better this week.
Posted by John at 9:50 PM 1 comment: