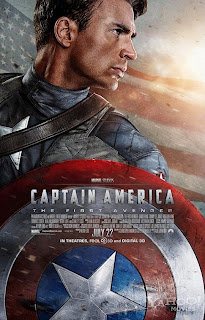 My darling wife let me sneak out of the house today to see Captain America: The First Avenger. It may be the last movie I see in a theater for a while. Not complaining, just stating a fact. And I've been doing well seeing all the Marvel tentpoles, so naturally, I figured I'd better make my last one this one.

For those of you unfamiliar with Cap's mythology, allow me to educate you: Steve Rogers is the quintessential 98-pound weakling, but one with a huge heart. He wants to serve in the United States Army during World War II, so much so that he tries multiple times at multiple stations to enlist. The problem is, Steve has a host of medical issues that keeps him classified as 4F.

His only chance is to agree to an experimental program, one designed to create a squad of super-soldiers. But due to a small problem, Steve is the only one to receive the treatment, thus making him Captain America.

At first, Cap is only used as a USO sideshow, but soon he finds himself on the front lines, facing an evil German scientist known as the Red Skull, the head of a Nazi research group called HYDRA. Red Skull had diabolical plans that could reshape the world, but that's only if Captain America can't stop him!

I'm not quite sure what to think of this movie. I had a lot of fun watching it. While no one is going to win an Oscar for this one, there were some great performances by Tommy Lee Jones as a gruff drill sergeant (I know, what a stretch for him, huh?). And Hugo Weaving left bite marks all over the scenery as the Red Skull. And Hayley Atwell as Peggy Carter was kind of fun too.

Chris Evans as Cap? Well, let's see here. I kind of liked him better when he was the scrawny runt. For some reason, I appreciated his heart a whole lot more. It was almost as if once he became the super soldier, he got swallowed by the loud explosions and action sequences. And while I kind of get the need for an action montage in the middle of the movie, I thought it detracted from it a bit.

What really bothered me, though, is how they left one major plot thread dangling. I won't say what it is, but it's something that I think they should have resolved at the very end. Maybe they're saving it for the Avengers movie next year. Or maybe there will be future Cap movies that will sew things up. But it would have been more organic to resolve it in the first movie.

And, speaking of the Avengers, make sure you stick around until the very end, okay? Once again, over half the audience left without seeing the tag, which turns out to be a sneak preview of the Avengers movie. Not a lot in terms of plot, but it is interesting to see Cap, Tony Stark, and Thor hanging around in what I can only assume is a SHIELD conference room.

Anyway, Cap wasn't as good as the first Iron Man movie or Thor. I think it was marginally better than the second Iron Man movie. And it does have me eager to see what Joss is cooking up for us next summer.
Posted by John at 11:46 PM No comments: 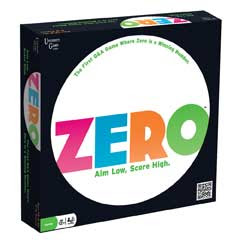 I just got done playing a pretty cool new board game, one that I had something of a stake in. Well, maybe not a stake, but I was certainly involved. That game would be Zero by University Games.

To create this rather unique trivia game, the good folks at University Games surveyed around 500 people (I was one of them; so was my brother-in-law) to see who answered what and how often. For example, "Name countries that start with the letter 'I.'" So they asked those 500 people and saw how many answered what. The trick is, you want to pick the one people said least often. For every ten percentage points on the answer card, you move forward one space (i.e. if an answer rated a 50, you move forward five spaces). The object is to not cross the finish line, to be the final player on the board. There are ways to "rewind" and go backwards.

All in all, it's pretty fun. I worry that it's possible to run out of cards eventually; people with a good memory might start filing away the best answers pretty quickly. But it's certainly worth the play.
Posted by John at 9:26 PM No comments: 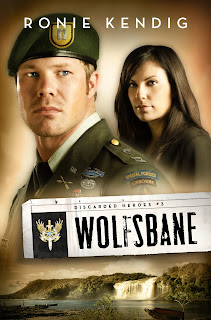 The valiant men of Nightshade are back and this time, one of them has to face mistakes from his past that threaten his life and the lives of those he trusts.

Midas Metcalfe is a medic for Nightshade, a black ops team that's sent into dangerous situations that the U.S. can't handle in any sort of official way. His team is brought into help out Danielle Roarke, a demolitions expert with the army. She was held captive and brutalized by a general in Venezuela, only upon escape, she finds no one believes her tale. Nightshade has to escort her back so she can clear her own name.

But things are not as they seem. Even as Midas and Roarke battle their almost uncontrollable attraction for each other, forces in both of their lives are threatening to consume them. Can they find safety together? Or will they be completely torn apart.

I love Ronie's books. They are a great mixture of action and romance. She put together a great mixture of plot elements that seemed to be completely unconnected, but as the story chugged along, they all came together. My only (minor) gripe is that the romance between Roarke and Midas seemed a bit . . . rushed. I don't know, maybe it's my gender, but it seemed to come together all a little too conveniently.

I will say this, though, I appreciated the way that Ronie wrote gritty in this book. This is not, in any way, a squeaky clean, sanitized Christian book. There are some real world things that happen (one that caused my eyebrows to rocket into my quickly receding hairline), but I appreciated the care that Ronie used in crafting this story.

I'm really looking forward to the conclusion of this series, namely Firethorn, especially since there was just a tiny glimpse of what was going on at the end of this book. Well done, Ronie. Well done!
Posted by John at 1:21 PM No comments:

. . . I'll just link to this review I did four years ago. For some reason, I've been thinking about this one a lot lately.

Have a happy and safe Fourth of July, everyone. Don't blow up too much of our country while you're celebrating our independence.
Posted by John at 9:00 AM 1 comment: 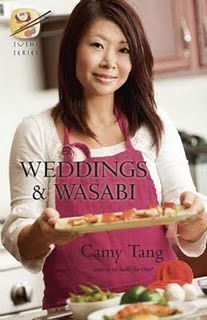 A very sweet coda to a great series.

I know it's odd that I would read romantic chick-lit like Weddings & Wasabi by Camy Tang, but I met Camy at the first ACFW Conference that I ever attended, so when I heard that she had started publishing her Sushi Series, I was curious what it was all about. And once I read Only Uni, I was pretty much hooked. So I had to read this last book to see how it all wrapped up.

Jenn Lim has just graduated with her culinary degree and now faces a crisis. Her Aunty has pretty much demanded that she come to work in her restaurant, but Jenn has had enough of being a doormat, so she defiantly decides that she is going to be a caterer, starting with her cousin Trish's wedding. And maybe her rebellion could also include that handsome man riding a Harley that she just met too.

I had a lot of fun reading this book, but there was one thing that had me a little upset: it's so short! This one clocks in at 110 pages, so there's not a lot of room for plot development. Everything is pretty much straight-forward and, in some cases, a little rushed. I can sort of understand that: Camy had to self-publish this book, so I suspect that finances played a part in the book's length, but I was a little disappointed that we couldn't spend a little more time with Jenn and her cousins.

But this book was able to do what it had to. It wrapped up a lot of the through-lines of the Sushi Series (especially the one about Grandmother) and I thoroughly enjoyed it.
Posted by John at 7:42 AM No comments: 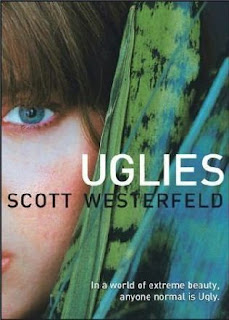 I first heard about Uglies by Scott Westerfeld a few years ago. A friend's daughter was interested in trying to write a screenplay adaptation of this book and was talking about it on Facebook. At the time, I kind of shrugged it off; it was a YA book and I wasn't all that interested.

Boy, what a difference a few years make.

What really cinched the deal for me was the fact that I just recently finished two other books by Westerfeld and enjoyed them enough that I wanted to see what else he had to offer. So onto my Kindle went Uglies and I just now finished it.

This is the story of Tally Youngblood, an Ugly who is about to become a Pretty. Apparently at some point in the (near) future, society gives people an operation at the age of sixteen that wipes away all physical imperfections and makes them all good looking. Once you become Pretty, you move across the river and party all the time.

But until then, you're stuck in Uglyville, and that's where Tally finds herself, longing to be made Pretty so she can join her friend, Peris, in New Pretty Town. To pass the time, she starts pulling pranks on the younger Uglies and the new Pretties. And that's how she meets Shay. Like Tally, Shay is also waiting to be made Pretty. Sort of. But Shay has a slightly different dream in mind, one that will pull Tally away from the future she had planned into one that's a little more real.

This was a fun read. Once again, Westerfeld did a great job creating a plausible world, and he also crafted some really memorable characters, especially Tally. I thoroughly enjoyed this book and I'm looking forward to reading the others in the series. But not yet. I still have close to two or three dozen books in my to-be-read pile.

But when I burn through those, you can bet I'll be going back to Uglyville.
Posted by John at 2:36 PM 1 comment: