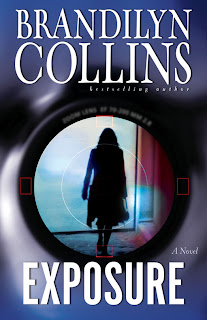 Newspaper column writer Kaycee Raye is a bundle of neuroses and phobias. She hates dentist drills, bees, heights, and enclosed spaces. But most of all, she thinks people are watching her. She tries to deal with her fears as best she can, channeling it into her nationally syndicated column and it actually helps.

Until her worst fears start to come true.

Pictures of a dead man appear in her house as if by magic, each one bearing messages that Kaycee is being watched. Even worse, tragedy strikes someone close to Kaycee and she begins to wonder if that's related to "them" watching her. Can she find her way out before it's too late?

That's the story of Exposure by Brandilyn Collins. This was a pretty good book. Lots of twists and turns to keep you guessing. To be honest, I had the ending figured out about halfway through, but that's because I accidentally saw one line on the last page. It kind of pulled it all together for me and I realized what was happening. But not completely; I had my own theory about what was happening to Kaycee that turned out to be wrong. Oh well.

Brandilyn's writing is taut and thrilling. She builds up the suspense with each chapter and, like I said, keeps you guessing. Maybe if I hadn't ruined the ending for myself, I would have been guessing to the very end. I can't say for certain anymore. But I'd definitely recommend this.

Oh, and apparently, the FTC recently released a ruling or an opinion or something that says that bloggers such as as myself have to come clean about how we acquire the books that we review. So in the interest of fairness, I bought this book at the ACFW National Conference. So there you go.
Posted by John at 9:09 AM

She got me good with this one. I should know better, but the way she didn't address certain aspects fooled me. Don't you hate spoiling yourself? I remember when I read the comic version of Revenge of the Sith and saw that Anakin **spoiler** turned to the dark side **end spoiler**. Man, what a bummer...