Well, a few weeks ago I splurged and bought the full game. This was because I heard phenomenal things about this game and I wanted to see if it's really as good as they said. And it is. It truly is. 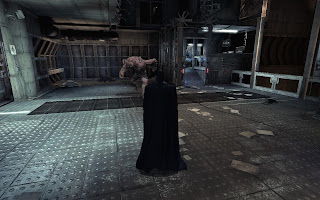 As I said in the earlier review, the story is pretty simple: Batman has captured the Joker and brought him back to Arkham Asylum. Joker breaks free and traps Batman on the island with the worst rogues and villains, a veritable who's who of Batman's nemeses. As Batman, the player must navigate the asylum and do his or her best to spoil Joker's fun, especially since Joker's schemes threaten the rest of Gotham City (which shouldn't come as a big surprise).

So let's get right down to it. Graphically, this game was incredible. I commented on this already. Very gritty, very grimy, very earthy. I did have some trouble with a few of the levels every now and then. The big, sprawling levels caused my computer to drag a little at times, but nothing that hampered my enjoyment too much. 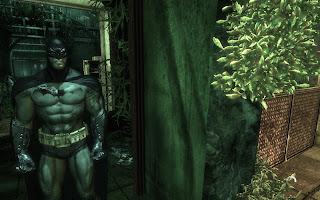 One of the features I loved, graphics wise, was the damage Batman took through the game. He didn't remain pristine. He picked up gouges, tears, dust, dirt, so that by the end of the game, you could tell that Batman had really given his all. It was a minor thing but a very nice touch.

Speaking of nice touches, I said this in my previous review, but how awesome is it that the game developers got the vocal talent from the animated series to do the voices for the game? I suppose I could have gotten used to new voices for Batman and Joker, but come one. Kevin Conroy and Mark Hamill are awesome at what they do.

On to combat. In my previous review, I opined that combat seemed a bit too simple. I'd like to revise that and say that the combat is deceptively simple. Yes, it mostly consists of mouse-clicking over and over and over, but you have to exert a fair amount of control to keep things flowing smoothly. This is especially true of the challenge modes, but I'll get to those in a little bit.

On top of fighting, there were a number of stealth levels which only makes sense. Batman did train as a ninja, after all. I normally hate stealth levels, especially when they're tacked on for no reason. And while some of the "reasons" for the stealth levels seemed a bit contrived, I really didn't mind. There were enough tricks in Batman's arsenal that I actually preferred taking the baddies out quietly to fighting them.

But there's even more to the game than the plot that revolved around the Joker. Apparently the Riddler's been busy too, hiding riddles and weird question mark trophies all through the island. Part of the challenge of the game is to track every single one of these down, along with destroying chattering Joker teeth and finding interviews with Arkham patients (some of those were awesome, especially the ones for Scarecrow and Zsasz). Admittedly, I cheated and went on the Internet to figure out where they all were, but still that was fun.

Even though I've beaten the storyline portion and found all the Riddler schwag, there's still more to do. I have about two dozen challenge levels to beat yet. This is probably the most interesting part of the game in my opinion. There are two types: combat and predator (or stealth). In combat, you fight wave after wave of Joker thugs and gain points based on how smooth your combat is. It's not easy to get a smooth fighting flow going. If you get hit or miss a target, your flow is interrupted and you don't get as many points as you could. This is where combat becomes extremely tricky.

In the predator challenges, you face off against a certain number of thugs and have to take them all out using different stealthy tactics. The trick here is to earn three trophies by taking out the thugs in very specific ways: inverted takedowns, jumping out at them from around a corner, and so on.

So even thought I've "finished" the game, I'll still be hopping on it from time to time to try to get all the challenge trophies.

I do have one major gripe about this game, and it's the fifteen minute prologue to the beginning. In the opening segment, you have to escort Joker, who's strapped to a Hannibal Lecter-style gurney, through the foyer of Arkham and into patient processing. All you can do is walk. Nothing else. And yes, stuff happens (like an encounter with Killer Croc or Joker "getting free"), but it was so boring. I wanted to start throwing batarangs I was so bored. 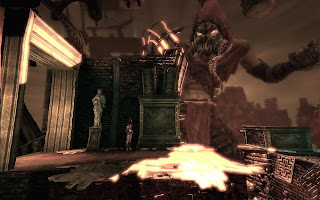 And while I'm at it, there's a minor gripe too and it has to do with Scarecrow. There were a few times when the "World's Greatest Detective" blundered into things that even I saw coming. I get that it was necessary to kick off the surreal Scarecrow levels (which were an interesting challenge, to say the least), but still, a little more creativity on the part of the designers could have alleviated that.

But all told, Batman: Arkham Asylum is a fantastic game. It's well put together, fits the material well, and is a blast to play.
Posted by John at 11:06 AM