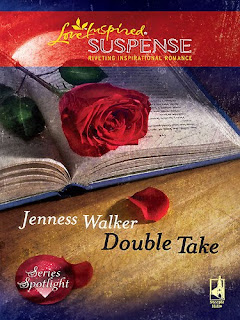 I'm having a hard time admitting this, but I just got done reading a romance novel, namely Double Take by Jenness Walker.

Yes, I know. I'm a speculative fiction guy. Emphasis on the "guy" part. I'm not exactly the target audience for this book, I'm guessing. And yet a week ago, I sought this particular book out at Walmart and bought it and read it. Why?

Because I owed the author for laughing at her. But more on that in a moment.

The story follows Cole Leighton and Kenzie Jacobs. Cole is waiting for a bus, reading a thriller called Obsession, when, much to his surprise, a woman looking exactly like the cover model, joins him at the bus stop. He chalks it up to coincidence and keeps reading. The main character in his book also boards a bus, only to have the vehicle stopped and the heroine kidnapped.

Well, guess what happens to Cole? That's right: the bus he's on is stopped and the look-alike is pulled off by masked men and kidnapped. Cole tries to tell the police about the strange coincidence but they won't listen. So Cole takes it upon himself to rescue the woman. Following the clues in the novel, he tracks her down and saves her life, thus meeting Kenzie.

Now Cole and Kenzie have to try to stay one step ahead of the kidnappers as they try to re-enact the book. Who is it and why is this happening?

This was a really fun book to read. As much as it pains me to admit it, I thoroughly enjoyed it. Jenness Walker keeps the plot moving along, throwing enough obstacles in their path (and between them) to keep things tense. The only downside was that I was a little unclear on the villain's motivation. Maybe that's my problem, I don't know.

So what did I mean about laughing at the author? Well, I had the privilege to meet Jenness Walker at the ACFW National Conference in Denver about a month ago. We hung out on the first day and, as we talked, she told me that she still got nervous pitching to agents and editors.

Well, the next morning, at worship, it was announced that Jenness Walker was going to give the devotional. Remembering what she had told me the day before, I burst out laughing at the cognitive dissonance. But Jenness, you did a fabulous job with the devotional.

Now if you'll excuse me, I think I have to go punch something. Or do something sufficiently manly. . .
Posted by John at 6:26 PM

Okay, so I'm a little late reading this...But thanks. :-) Would it help your male ego to know that a lot of guys have read it, and most of them are quite manly? And I didn't actually pay any of them? Anyway, I'm glad it wasn't too painful for you to read. I should have sent you some brown packaging paper or whatever to cover the rose on the front. lol
Can't wait to read your stuff!