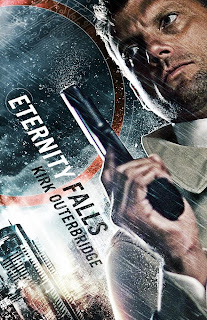 Imagine a future world. A genetics company has hit a literal fountain of youth. They can shut off the aging process at a cellular level and allow people to live pretty much forever. Thousands of people have had the Miracle Treatment, as they call it.

Only now one of them is dead. From natural causes. And she's the company's spokesperson.

Enter Rick Macey, a private investigator hired by the vice president of the company, to figure out what happened to Greta Darling, an eighty nine year old actress who looks to be twenty two. The vice president, Sheila Dunn, believes that a religious nut is out to bring down the company and the Treatment. She hopes Macey, with his unique background in the Civil Defense and Intelligence.

The thing is, Macey knows she's not far wrong.

Now Macey is on a collision course with his past, trying to find a solution to this conundrum before eternity falls . . .

That's the basic premise of Eternity Falls by Kirk Outerbridge. I don't think I've ever read a cyberpunk novel before. At least, I can't remember any. I don't think this one will be forgettable. Outerbridge created a very realistic world with a definite history and inner logic that hangs together quite well. The Los Angeles of the late 21st century is a strange mixture of glitz and desolation with colorful denizens and plenty of problems.

The theological underpinnings of the story were fascinating. I won't go into those either. But Outerbridge skirted a fine line and didn't fall over the edge with this one and I really appreciated what he did.

But most of all, this book was a fun read! Lots of adventure, action, and good humor.

My only complaint is that the romantic subplot seemed a bit tacked on. At the very least, the shift into it didn't make a whole lot of sense to me. But that's a minor thing.

I've been wanting to read this one and a couple more from MLP. This one, though, is the one I want to read the most. Good to know it's worth the time!

One more addition to the "to be read" stack.