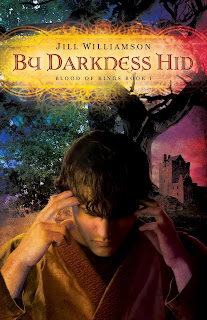 If you haven't noticed by now, I read. A lot, as it turns out. So it's rare that I find a book that gets me genuinely excited. Oftentimes, I'll read a good book and think, Huh. That was pretty good. But that's the end of it. There are a few, though, that really catch my attention and make me sit up and take notice.

By Darkness Hid by Jill Williamson was one such book. When I first read it, my immediate reaction was "WANT. MORE. NOW!" This was followed by a burst of gamma radiation and I wound up smashing most of my living room. Er . . . wait, maybe that never happened.

In all seriousness, I did want to read more and immediately. As a matter of fact, my first review of this book ended with an admonition to Williamson to "get cracking" on the sequel. And crack she did . . . that didn't sound good either.

At any rate, the sequel came out just a month or two ago, namely, To Darkness Fled. And I gobbled that one up as well.

I think part of what made me love By Darkness Hid was Achan's journey. Williamson hit just the right rhythm of rising him up and then smacking him down again. His was a story of hopes and frustration, played out in ever-widening circles, inevitably leading him upward to the final surprise at the end. But of course, that's only a stepping stone to a larger journey, a more desperate adventure.

You may have noticed by this point, I haven't really said much about the plot or did much of a review. That's because, like I said, I've posted one already. If you're interested, you can go back and click on that link to see what I said when the book first came out. You can even read my review for the second book too.

So what do I have in store for the rest of the blog tour? An interview with author Jill Williamson! So come on back tomorrow!

In the meantime, go check out what the other tourists have on their minds:

So, what did you think of the second book? Did it deliver?

Absolutely! There's a link to my review in my post. It's the title of the second book, To Darkness Fled. I probably should have made that clearer . . . my bad.

I see your reaction was similar to mine. Well, except for that smashing up the living room part. :) I too greatly enjoyed this book. I look forward to coming back tomorrow and reading your interview.

John, you make me laugh. Did you see Fred's boxing cat?

I'm glad you like my story, John! No pressure on book three, of course. *wince* I'm off to get back to writing book three now...