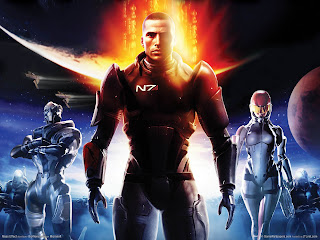 Before I stumbled off to bed, I headed over to the Entertainment Weekly website to see if they had any articles up yet about either the Chuck season finale or the Law & Order series finale (I'll have some thoughts on that tomorrow). Instead, I found some news that both thrills and horrifies me.

Apparently Legendary Pictures has acquired the rights to make Mass Effect into a movie.

This thrills me from the stand point that the Mass Effect games are already very cinematic, telling an epic story that's very well written with some great characters. Writers of any genre or medium could learn a lesson from the folks at BioWare on how to put together a gripping story. But the fact that Mass Effect is already so cinematic and so epic, I have a hard time believing that anyone could do the story justice. How are you going to cram 30+ hours of game play into only two hours of movie? Yes, granted, they'd cut out a lot of the side missions, but the side missions are what gives the games their depth.

Also troubling is the fact that part of what makes the Mass Effect games great is the fact that a lot of what happens is left in the hands of the player. Granted, the story isn't completely open ended: they do funnel players through the story and there really is only one big ending with two distinct flavors, but still.

What's truly troubling is the lousy track record that Hollywood has when it comes to adapting video games to the big screen. I seriously can't think of even one adaptation that was any good.

Oh well. As much as I may be wary, I suspect that if/when this project sees the light of day, I may just go. Because I mean, c'mon. It's Commander Shepherd.
Posted by John at 1:41 AM

I was thinking, wait a minute--there's been some decent video games to movie adaptations. Then, I realized, no, there really isn't. I think I watched Mortal Combat and Street Fighter in junior high and even then I realized they were terrible movies.

If this was announced two years ago I might have been excited...but honestly, I couldn't get into the sequel so now I don't really care. Is that wrong?