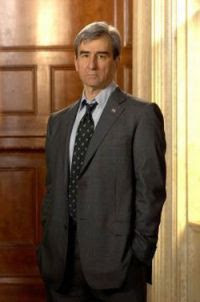 Well, I guess that's a wrap on one of my favorite appointment shows, namely Law & Order on NBC. And much to my disgust, the show went out with a whimper, not a bang. And yes, I guess the pun is somewhat intended.

In the now series finale apparently entitled Rubber Room, a disgruntled individual was posting pictures of guns and a video of a pipe bomb exploding on the Internet. The police, with the assistance of the District Attorney's office, put on a frantic investigation to stop whoever it was. While I'm tempted to post spoilers, I won't. Maybe some of you have it on DVR and are waiting to watch it.

While the episode was certainly exciting and definitely played on a hot-button topic (education, teachers' unions, school shootings), once it was over, I felt a little disappointed. For starters, while there was a lot of "Order," there didn't seem to be much "Law" (or would that be the other way around?). Yes, ADA Cutter was involved, trying to get subpoenas from the grand jury to go fishing for suspects. And yes, Sam Waterston had a great Jack McCoy moment where he threatened legal action against a representative of a teachers' union, capped with a roared, "Get out of my way!" But for a show that was built on a half-and-half structure, half police procedural, half legal drama, the latter half was missing.

Also problematic for me was Lt. Van Buren's contribution to this episode. I get that this was S. Epatha Merkerson's final episode, so they wanted to somehow cap off the whole cancer plotline, but honestly, this fell flat. There was no closure to it at all, which is a problem since the cancer plotline has been causing the whole season to drag. One of the interesting quirks about this show has been the fact that they didn't allow the principle characters' personal lives to spill over too much unless it directly impacted the on-going investigation. So, for example, it worked in last week's Immortality, which centered around cancer treatments developed from stolen cells. But it hasn't fit most weeks. And it's not that I wish ill on the character, but the way the whole cancer subplot was resolved seemed like a total cop-out.

For my money, I wish they would have ended with last week's Love Eternal. I seriously cannot remember the last time I laughed so hard at an episode of any TV show, including the ones that are supposed to be funny. Love Eternal had just the right blend of insanity, enough that I was left chuckling for hours after I finished watching it.

I mean, how can you go wrong when you blend in a fashion reality TV show, bizarre sex games, a divorce daisy-chain, and a classic Law & Order courtroom trap to catch the real killer.

And then there's this gem (pun definitely intended):

The whole "turning dead people into diamonds" thing was classic, especially the ending where ADA Rubirosa received diamond studs made out of the murder victim as a thank you.

Part of the reason why that tickled my fancy so much is because the whole cremated diamond business is real. I've seen brochures at funeral homes. I can't imagine anyone actually doing that, but there you go.

So I guess that actually describes the whole situation with Law & Order pretty well. It didn't deliver when it should have and when it did, it was at the wrong times. I suppose in the end, it's okay that it's gone. I just wish it could have gone out on a better note.

There are two other attendant issues that go with this. Should they get two hours to do a proper series finale? Maybe. I wonder what that would look like, though. It's not as if crime will grind to a halt if Jack McCoy decides to retire. I think it'd be somewhat challenging to craft an actual capstone to this series.

And will I check out the impending Law & Order: Los Angeles? Probably. I mean, even if I think it's an ill-advised spin-off, it's still Law & Order. I gotta get my cha-chung fix somewhere.
Posted by John at 10:11 AM