Loose Girl: A Memoir of Promiscuity 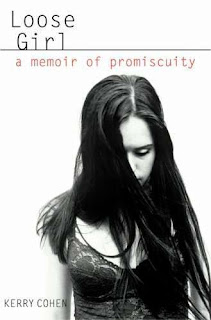 Several months ago, I spotted Loose Girl: A Memoir of Promiscuity by Kerry Cohen on a shelf at Target and was intrigued. It's one of those times when my curiosity got the better of me and I wound up buying the book without any real conscious decision on my part. In some ways, I suppose I was hoping to get some insight into why some girls become "loose." I don't know if I actually got the insight I was hoping for.

Cohen recounts the story of her teenage and young adult years, revealing how she lived her life in constant pursuit of self-worth, which she believed would only come from a boy. If a boy loved her, she reasoned, she was worth something. That hunger drove her to give herself to dozens of guys over the years, constantly seeking the one boy who she thought would finally complete her.

Complicating matters was the constant use of alcohol and drugs, her narcissistic mother, her lackadaisical father, her crumbling sister, any number of factors. It isn't until Cohen graduates from college, going through at least two supposed relationships, and discovers a love for writing that she finally seems to break the cycle of addiction (for the most part) and moves on.

For the most part, Cohen's writing is engaging and, for me, heart-breaking. It compelled me to keep reading, hoping that I would see some glimmer of hope. None was forthcoming. Cohen's life seemed to be in ruins from an early age and didn't seem to improve. Even when she finally gets what she wants, namely a boyfriend who supposedly loves her for her, her life continues its downward spiral as she sabotages things with her neediness. The void in her life still needs to be filled and still wreaks havoc on things.

Upon further reflection, though, Cohen's book, while engaging, is somewhat lacking. For starters, Cohen seems to place the blame for her self-destructive behavior on others, primarily her parents. While she acknowledges that the need lies within herself, she doesn't seem to take much personal responsibility for her actions.

More problematic for me is the fact that the ending kind of peters out. One day, she meets the right man, and that somehow magically breaks the hold that sex held on her. It's too simplistic, nearly a deus ex machina, and while she acknowledges that she still struggles with her problems, it seems too easy.

So I'm not sure what insight I gained. On the plus side, this was an easy read. I completed it in a little over a day.
Posted by John at 6:47 AM