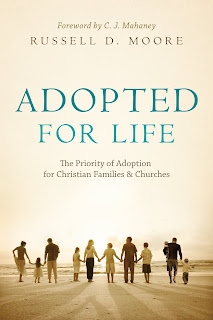 I've mentioned this before, but adoption is a subject that's near and dear to my heart. So I was naturally interested to see what Russell D. Moore had to say in his book, Adopted for Life.

It's an interesting book. Moore argues that for the Christian, adoption should be a priority, either in opening our homes to children in need or by supporting those couples who do, either financially or spiritually. He bases his case on the numerous passages that call on God's people to care for the "fatherless" and the fact that, spiritually speaking, we are all adopted children in God's family. It's our common experience, and every adoption in the temporal world is a reflection of the greater reality of the Gospel.

I really appreciated what Moore had to say about adoption. He opens his home and his family, explaining the emotional process he went through when he and his wife adopted two boys from Russia. His is a story that anyone can appreciate and he gears his book not just for those who have adopted or hope to soon. He also wants his story to be read by those who know families built by adoption.

His book isn't all happiness and sunshine, though. He gets rather sharp in his words on certain subjects, such as people's attitudes toward transracial adoption or the ignorant and hurtful words that people sometimes have toward adoptees, such as the woman who asked him if his two boys were "really" brothers or not. There were times when Moore got a little repetitive and, I'll admit, I skimmed some of the last pages. But all in all, it was a good book.

Like I said, adoption is a subject that is near and dear to my heart because my wife and I are engaged in trying to build our family through adoption. As I've said before, we are home study approved and hoping to meet the right birthmother soon. If you know a woman who is considering adoption, please pass along our e-mail to her. We can be reached at johnorjill [at] live [dot] com (substituting the appropriate symbols for the words, of course).
Posted by John at 8:45 AM

I strongly believe that the choice to adopt should come from a strong desire to raise and love a child and adoption being a vehicle to that. I think adopting because it's right or a good thing to do, a calling or because there are so many needy children should not be the principal or significant reason. There are so many things to consider and be conscientious of when raising an adopted child it's important the motivation be the right one.

Good luck on your pursuit of building your family through adoption. I don't believe that adoptive parents should be commended for doing a 'good deed.' It's so common for people to tell an adopted child that he or she is lucky when in fact it's the adoptive parents who are lucky. Sending you lots of wishes for luck soon!