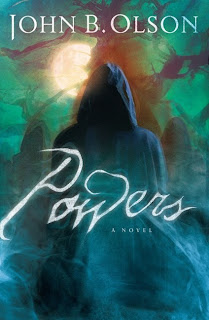 Powers by John Olson proved to be an interesting ride.

It starts out in the swamps around New Orleans. A young Gypsy girl named Mariutza finds her life up-ended when the Badness comes after her and a man she calls Purodad, who she believes is her grandfather. Purodad is killed and his final words send Mariutza out of the swamps to find a mythical hero from her childhood bedtime stories.

In the meantime, Jazz Rechabson, a musician, finds himself caught in the middle of an unimaginable adventure. He's having odd visions of death, of destruction, of all sorts of different things. Can he sort through them all and figure out what's happening to him before he is killed like the people in his visions?

I've met John a few times at ACFW Conferences and he's a really cool guy. I've really enjoyed his books in the past, most notably the books he wrote with Randy Ingermanson, namely Oxygen and The Fifth Man. And I also enjoyed Shade, of which Powers is a sequel.

Because I read Shade a few years ago, I was ready to be plunged into the odd world of the Standing once again. I was already familiar with some of the concepts and ideas, but I have to admit, I kept feeling like I was missing something. Maybe if I were more familiar with Gypsy culture and heritage, I don't know. A little confusion isn't a bad thing; I'm not a big fan of authors who feel the need to bash the readers over the head with the blunt end of their premise. I also felt like I missed some connection between the main plot and the involvement of the FBI. Maybe I missed a vital paragraph somewhere, I don't know.

But I did enjoy the book. John crafted a stunning and fun world to visit, one based on an obscure Biblical passage. I get the feeling there might be another story lurking in the wings. If so, I'm all for it. Bring on more of the Prophet and the Princess, John! It should be fun!
Posted by John at 7:59 PM