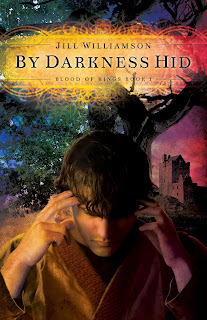 Holy cow! I am in awe right now of Jill Williamson's phenomenal book, By Darkness Hid. Let me put it to you this way. I'm a fast reader. I always have been. And how fast I read is directly proportional to how much I enjoy what I'm reading. I do believe I devoured this 490 page book in approximately 24 hours. When I woke up this morning (or rather, was woken up by my son. At 5:30 in the morning), I really wasn't all that upset because it meant I could finish reading this book!

The story centers around two young people. One is Achan Cham. Achan is a stray, worse than a slave, forced to work in the kitchens of a spoiled crown prince. The other is Vrell Sparrow, supposedly another stray but really a young woman in hiding because she doesn't want to marry the aforementioned spoiled crown prince. Both Achan and Vrell are adept at bloodvoicing. They can read other people's thoughts. They can project their own to others. And Achan is probably the most powerful bloodvoicer to come along in a generation.

Yet there's a fair bit of intrigue that both must face. Achan is selected by a knight named Sir Gavin to train as his squire (although it's illegal for strays to do so). And Vrell is taken from her hiding place to be the apprentice of a man named Macoun Hadar. While you know that these two will eventually cross paths, the how and why is simply breathtaking.

Can you tell I loved this book? Absolutely adored it. Williamson's characterizations are incredible. Your heart simply goes out to Achan as he is abused as a stray. You want Vrell to be able to go home to be with her family and marry the man she truly loves. Personally, I want to punch spoiled Prince Gidon in the face. Repeatedly.

The world Williamson created is vibrant and fun. The bloodvoicing is fantastic as well, especially as Achan discovers his talent for it. And the plot was great. I did see the surprise coming ... well, kind of. I had a sneaking suspicion what Sir Gavin was up to, but I didn't realize the full extent until the trap was sprung.

Probably the only gripe I have is that the sequel isn't in my hands already so I can read it. In the final author's note, Williamson reveals that she's working on it, To Darkness Fled. All I can say is, Jill Williamson, get cracking!
Posted by John at 8:31 AM

Now I wish I didn't already have a deep stack of reading material demanding my attention; a good, absorbing story might be just the prescription for relaxing my brain, and this one sounds like my kind of book.

You are my hero!

The sequel will be out April 2010. Hope that's not too long of a wait.