Let me tell you a little story.

About eight years ago, when I was a fresh-faced associate pastor in Blue Earth, Minnesota, I started hearing rumbles about this new show on NBC. I didn't watch the first few episodes. I don't remember why exactly. But I knew my senior pastor did. His wife, who was attending med school at the time, could relate to the characters. And, he reported, his confirmation students believed that I behaved like one of the characters as well. He told me that I had to watch one of the episodes he had on video. So one night, I went over, not sure what I was getting myself into.

I found myself getting into Scrubs.

I was skeptical at first. But as I watched those episodes (not in the correct order, I might add), I was drawn into the world of Sacred Heart. I loved the random wackiness of J.D.'s fantasies. I savored the medical storylines. And I grew to admire Dr. Cox's acerbic wit (the aforementioned confirmation students believed I had a similar wit). I was hooked. 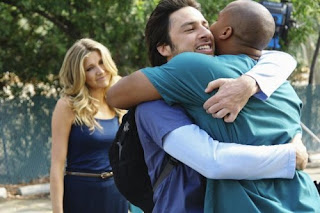 And now, it's eight years later. Tonight's episode, "My Finale," leaves us in a weird place. Word on the Internet has it that this was originally intended to be a series capper but that several key cast members are willing to go for a ninth season if the network is interested.

It pains me to say it. I still love a great Dr. Cox rant. While the show stumbled and grew a bit too dark in seasons six and seven, they recovered a great deal of the original fun this last season. But even still, it's time for the show to let go and for us all to move on.

Part of the reason why I say that is because, when you come right down to it, J.D. was the heart and soul of the show. He was the one who created most of the wacky fantasy sequences. He was the perfect foil for the Janitor. He meshed perfectly with Dr. Cox's gruff manner. Even if Zach Braff were to come back once in a while in future seasons, it wouldn't really be enough. He was the voice who bound the episodes together. And let's not forget the Scrubs naming convention. Every episode (with very few exceptions) were all "My." J.D. was the owner of that possessive. Since J.D. has left Sacred Heart, a major part of the show has gone with him. That can't be recaptured.

Now sure, it's possible that they could retool the show so it can run without J.D. Dr. Cox is still there as chief of medicine. While he may have gotten softer over the years (just a bit), he's not about to let up on anyone. Turk and Carla are still there. So is Ted and the Janitor. The new crop of interns are an interesting crew and I could see some fun dynamics growing out of this group. It could work. But I'm not sure if it's a good idea to try.

Let's face it. Tonight's episode was a perfect capper to a very good show, especially given the final fantasy sequence with all the guest stars (still wishing Gift Shop Girl and Franklyn could have been there. Thanks a lot, NBC!). That wrapped things up nicely, especially with the extended future fantasy. It feels done for me. This is a good place to leave it.

So am I saying that I won't tune in if it goes on from here. No. I'm not saying that at all. I would. But I would most likely be wondering if maybe, just maybe, things would have been better to end where they did tonight.