One of the funny things that's happened since Failstate was published was that a rumor somehow got started that I had a movie deal in the works. I'm not sure how that got started, but several people (who don't know each other) have asked me about it. I suspect it might have something to do with the starred review that Publishers Weekly gave me back when the novel first released. The last lines of that review were:

And maybe that got twisted into "John has a movie deal in the works?" I don't know. That'd be awesome, but it hasn't happened yet. Hollywood, if you want to talk movie or TV deal, call me! Or my agent, actually.

Anyway. Earlier today, I spotted a blog post by author Rachel Coker (of whom I am intensely jealous; she was first published when she was 16. Although, come to think of it, the stuff that I was writing when I was 16 was garbage, so it's probably better I waited an additional 20 years to figure out what I was doing). Rachel mused about who she would cast in a movie adaptation of her book. I haven't read Interrupted yet (although it is in one of my to-be-read baskets and high on the list), so I can't comment on her choices one way or the other. But that got me to thinking.

What if, by some bizarre stroke of divine intervention, someone did want to make a big budget version of Failstate? Who would I want to play the roles?

And the more I thought about it, the more I realized . . . I have no idea.

Seriously. I suppose part of the problem is that I'm not up on teenage actors (or actors who can pass for teenagers). Or it could be a fault of my writing craft.

But still, it's fun to dream, so I'm inviting you to dream with me. Let's cast a hypothetical Failstate movie! If you've read the books, who do you think should play the characters?

Before we get started, let's establish one quick rule: the people you cast have to be actors who can play the role today. No "time machine" casting. As awesome as it would be to go back in time so we can cast a teenage Nathan Fillion as Failstate, the laws of physics blah blah blah.

So who do you see in those roles? Let me know!
Posted by John at 11:03 AM No comments: Links to this post 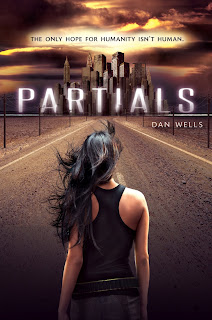 This is one of those books that jumped off a bookstore shelf at me and screamed, "READ ME!" I have no idea why. I think I liked the cover. Huh. Anyway, I just finished reading Partials by Dan Wells.

At some point in the near future, humanity is teetering on the edge of extinction. Most of humanity was wiped out by a group of synthetic lifeforms called Partials when those artificial people rebelled against their human masters. Then, to make matters worse, the Partials unleashed the RM virus, an epidemic that wiped out the majority of the human survivors. Only a couple thousand are left, bunkered down on Long Island, trying desperately to survive. That's not easy, though. Every time the human survivors produce a new baby, the baby catches RM immediately and dies. The youngest human being just turned 14 and things are turning desperate. The Senate has lowered the mandatory pregnancy age to 18 and a lot of people are not happy about it.

This is the world that Kira finds herself in. She's about to turn 16 and she's training to be a medic in a hospital. When she learns that her "big sister" is pregnant, Kira vows to find a cure to the RM virus. And she strikes upon a wild idea: why not see how the Partials deal with the virus? This leads Kira and her friends on a desperate hunt to not only capture one of humanity's avowed enemies, but see if they can find a cure in record time. But Kira has to be careful, because she might learn more than she wanted.

This was a pretty good book. I thoroughly enjoyed reading it. I found it interesting the way Wells described humanity's attempt to survive in a nearly abandoned part of what was New York City. For me, the most fascinating part was another of Kira's "sisters," Xochi, who was the music freak. She had gathered baskets full of MP3 players and had named them after the people who had monogrammed their names on them.

In some ways, the plot was a bit predictable. I had two of the twists pegged before they came. But that didn't diminish my enjoyment of this book. There appears to be a sequel in the works, and I, for one, can't wait to see where the adventure goes next.
Posted by John at 4:55 PM 1 comment: Links to this post 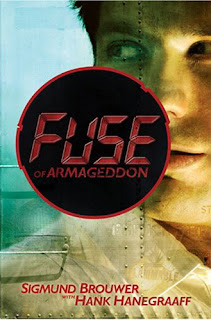 Fuse of Armageddon by Sigmund Brouwer and Hank Hanegraaff left me feeling a bit conflicted.

Quinn Mulvaney is a private negotiator in Israel. He handles kidnappings and hostage situations for insurance companies. But then, he's caught up in a massive plot. A Palestinian terrorist has kidnapped a wealthy American televangelist, one who has long preached that America must support Israel, no matter what. Quinn is asked to negotiate with the terrorist, even though he has strong feelings about the man's fate. But by doing so, Quinn finds himself in the middle of a far larger plot, one that could embroil the entire world in a gigantic holy war. For powerful men are using the hostage situation to fulfill what they think are God's prophecies. Can Quinn stop the plot? Or will this whole situation kill him?

I really, really wanted to like this book. I really did. But in the end, it left me kind of flat. The characters are mostly unlikeable, including the main ones. The plot is a bit too convoluted, with schemes followed by counterplots and even more counterplots and even more counterplots, so many that the whole story seemed to collapse under their collective weight. And the whole thing is preachy. Oh my goodness, is it preachy. It bludgeons us over the head with the blunt end of its premise.

And yet, for all of its flaws, I think this is a book that should be read and have a far wider audience, simply because its message is so important. Fuse of Armageddon makes the important point that theology matters and can have devastating real world implications. In particular, Brouwer and Hanegraaff attempt to show the impact that dispensational premillennialism has had and can have on the Middle East, particularly the conflict between Israel and Palestine.

I've actually been talking about this a lot over at Speculative Faith. If you want to get caught up on the discussion, you can watch the video playlist. In short, I'm not a fan of dispensational premillennialism. I'm a strict and ardent amillennialist. And this book helps explain why I take it so seriously. End times theology can have a major impact on the way we view the world today and interact with it. That's why I think more people should read this book, if for no other reason than to think through some of the messier implications of what they could or do believe.
Posted by John at 8:48 AM No comments: Links to this post

What Can Videogames Teach Us About Backstory?

So earlier this week, I was a presenter at the NextGen Writer's Conference, an on-line conference for teenage writers. It was an absolute blast! Rather than just write a post, though, I decided to go all high-tech and do a video. And here it is:

This won't be the last videogame/writing related video you'll see from me, though. I have a few more ideas and, at future conferences, I'll be presenting more of them. And I'll always be sure to share in this little corner of the Web as well.
Posted by John at 4:17 PM 1 comment: Links to this post