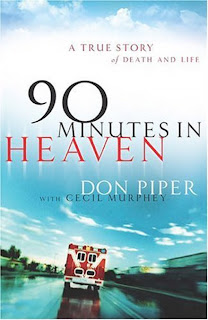 My congregation members know that I'm a reader. I do a monthly book review in our church's newsletter. A few of them have started passing books on to me to see what I think of them. 90 Minutes in Heaven by Don Piper is one of those books.

Don Piper is a Baptist minister who died in a car accident. An 18-wheeler rolled over his car and partially crushed him, killing him almost instantly. For 90 minutes, his body was trapped inside of his car while paramedics worked to help the others involved in the accident. Another pastor happened upon the scene and felt moved by God to pray for Piper. The amazing thing is, while he was praying, Piper came back to life.

But apparently Piper was occupied while he was clinically dead. He spent that hour and a half outside the gates of heaven, welcomed by his departed family and friends. But then he found himself in a hospital ICU, undergoing an experimental procedure so he could save his crushed leg.

The majority of the book deals with Piper's recovery from this horrific accident and the life lessons he took away from surviving. It's a fast read; I knocked it out in a matter of a day or three. There's no heady theological insights to be had here. It's inspiring to be sure, but overall, it's an average book. Not bad, not particularly good either.
Posted by John at 3:33 PM