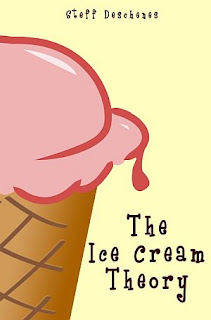 So what flavor are you?

Steff Deschenes, a self-proclaimed ice cream guru, has come up with an interesting theory regarding ice cream flavors and people. As she puts it, there are dozens if not hundreds of different flavors and nobody likes them all. People's tastes change. What was a favorite becomes bland and boring. A flavor you never thought you'd like turns out to be really great. There are combos that make your skin crawl and good old stand-bys that you'll always like because of the comfort they give.

Well, Deschenes believes that people are often the same way. Some friends you outgrow. Some people might surprise you at how much you like them. There are people you just can't stand, even though on paper you should be uber-compatible. And then there are the friends that are always there for you. That is the central premise of her book, The Ice Cream Theory.

Even though this book is billed as a "self-help book," it really isn't, not really. Instead, it's more of a quirky memoir. Deschenes dissects many of her own relationships and compares the people she meets to different ice cream flavors. There is an over-arching point that she makes at the end of the book that can be applied to anyone, but by and large, the book is mostly about her own relationships.

And that's just fine, don't get me wrong. Deschenes has an engaging and quirky style to her prose. The people-to-flavor connection never felt forced and most of them made me chuckle at how clever they were. The book engaged me the most when it was the most heart-rending. The chapters on Chocolate Oatmeal Raisin and Soy "Ice Cream" Sandwiches captivated me (especially the former).

In terms of craft, the book suffered only a little from what can best be described as "wandering apostrophes" (some words needed them, others didn't). But all in all, this was a very satisfying and quick read. Definitely one that I would recommend.
Posted by John at 7:58 AM