It would appear that I'm becoming more and more a fan of the undead. Scary, I know. First it was Plants vs. Zombies, then it was World War Z, and most recently Ex-Heroes and the occasional game of Left 4 Dead 2. Now, this past week, I found the simple pleasure of an indie game called Atom Zombie Smasher.

It's a pretty simple game, all things considered. You're in charge of a fictional city called Nuevos Aires in 1960. It's the zombie apocalypse and it's completely up to you to defend its citizens. You have a variety of forces at your disposal, from an evacuation helicopter to infantry who can protect a small area to blockades, all the way up to satellite bombardment.

What's really surprising is the simplicity of the interface. You control your forces from the top down, civilians represented by moving yellow dots, zombies by pink. 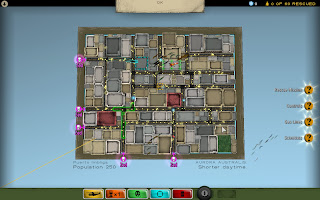 For each section of the city, you have to rescue so many civilians to achieve victory. That's not easy, since the zombies will chase and infect as many civilians as they can, swelling their ranks with each passing second. You only have a short time for each section, because when night falls, the zombies swarm the streets, making your job much more difficult.

The game is constantly changing, with new maps made at random. You're essentially in a race against the zombies, trying to "redeem" as many parts of the city as possible, scoring points for each civilian rescued and each section cleaned out. At the same time, the zombies are trying to claim as many sections as well and they definitely have an advantage. As the game progresses, the outbreaks become worse and worse. They score points for every civilian they infect and for every part of the city they hold. Either the player or the zombies win if they reach a certain total.

I'm going to put this bluntly: this is not an easy game. The first game I played on normal difficulty ended in a resounding loss for humankind. I switched the difficulty on easy and lost the second time as well. I finally won on the third time around. It took some time to figure out how all the mercenary units work together and you don't get to pick what you take along, making the game even more challenging.

There are a few things I don't like about this game. For starters, the tutorials are permanently switched on. I've searched for how to deactivate them but I can't figure it out. And the vignettes, supposedly to the tell the story, don't make sense to me.

I haven't examined all the features, like the mods and the on-line play, but this was a fun game, especially since it's on sale via Steam this week. It's a good buy for nine bucks.
Posted by John at 9:27 PM