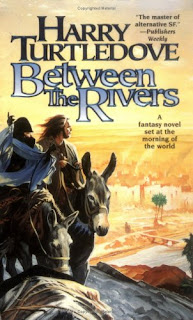 I know, I know, I know. The last time I read a Harry Turtledove book, I said I was pretty much done with the author. His latest books have been overlong and repetitive. And yet I can't quite quit the guy. He's written some great stuff in the past and, wouldn't you know it, I had another of his novels lurking in my to-be-read pile. And the amazing thing is, part of the reason why I liked this book is the repetitive nature of the text.

The book I'm talking about is Between the Rivers which, as the cover proclaims, is a fantasy novel set at "the morning of the world." More specifically, it's set in a fictionalized Mesopotamia during a time when gods walked the Earth and directly controlled their subjects.

At least, most of them do. The exception is Engibil, the god of Gibil. The people of his city have wrested a bit of independence from him, mostly thanks to the smiths who work in a new metal called "bronze" and the scribes who have developed this new-fangled "writing" business. Engibil still lives in his temple and can still influence his people, but by and large, the people of Gibil are free to do as they please.

This frightens the other gods of the region, something that Sharur, a merchant, discovers to his loss. For some reason, the mountain gods of a region have forbidden their people from trading with the men from Gibil, which could mean economic ruin for the entire city. Worse, for Sharur, it means that he will be unable to wed Ningal, his childhood friend. Sharur must decipher why the gods have suddenly shunned Gibil, a mystery that will take him deep into enemy territory and put him in direct opposition to the gods.

I really enjoyed this book. Granted, it's not as "fast" as some fantasy novels, but given the setting, this worked out okay. It's pretty clear that Turtledove put a lot of thought into his worldbuilding and for the most part, the world of Gibil felt alive and very consistent. This is especially true of the "voice" of the people. They often repeated themselves in a parallel fashion (i.e. "Father, I do not know if Engibil will permit this. I do not know if the city god will let this be.") that, at first, threw me for a loop. I figured I would get sick of it after a while. But I didn't. It actually put me in mind of the way some of the Proverbs are structured and made the world feel "right," so to speak. I could envision ancient people talking like this. Unfortunately, Turtledove wasn't always consistent with his voice. A few modern phrases crept in at odd times. For example, at one point, someone spoke of the gods "scoring points" off of each other.

The story itself bothered me theologically, not so much for the pagan gods running around; that was part of the story and I knew it going in. It more had to do with the freedom the men of Gibil sought to hold on to and gain more of. But even that aside, I enjoyed the story.

I'm not saying it was enough to make me come back to Turtledove. But it made for a nice send off.
Posted by John at 7:00 AM