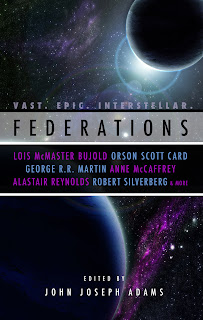 Another day, another sci-fi anthology read and done. This time, it was Federations, edited by John Joseph Adams. All the stories were set in vast, interstellar governments. The authors tried to discuss how such conglomerations of worlds and cultures might actually work.

And for the most part, this turned out to be an excellent book. There were a few duds scattered through the pages, stories that didn't really engage me or left me scratching my head. But by and large, the stories were unique and wonderful. A few of my stand-out favorites:

Twilight of the Godsby John C. Wright, a weird blend of fantasy and sci-fi set on a generations ship. Pardon Our Conquest by Alan Dean Foster, a funny tale of a war-like race that lost a war, right? 'Cuz it sure doesn't seem that way. The Shoulders of Giants by Robert J. Sawyer (although why I like this one, I'll explain in a little bit). And especially The One with the Interstellar Group Consciousnesses by James Alan Gardner, a rom-com about the gestalt consciousness of an interstellar government looking for its soulmate. Seriously, it's awesome.

The only real downside to this book is that it basically made me realize that a short story I wrote a few months back has to be thrown out completely. See, I had written a story about a generation ship that I thought would be fun and kind of a wild ride. Small problem: if you take Twilight of the Gods and mash it together with The Shoulders of Giants, you basically get my story. And the two original stories are a lot better than mine.

Oh well. That happens, I guess. But if you're a fan of sci-fi, this is a good read. Highly recommended.
Posted by John at 9:10 PM