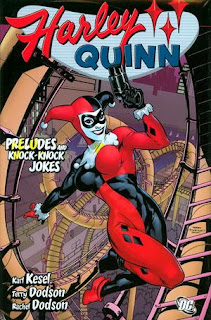 Ah, Harley Quinn, my guilty little pleasure from the Batman universe. For those of you not in the know, Harley Quinn is the Joker's long-time "girlfriend." Or sidekick. Or punching bag. It's kind of complicated. She first appeared on Batman: The Animated Series and proved to be so popular that DC added her to the comic books. I've been fascinated by her, especially after the Harley's Holiday episode where she tried to leave her life of crime behind, and especially since Harley Quinn: Mad Love. So naturally, when I saw Harley Quinn: Preludes and Knock Knock Jokes at the aforementioned closing Borders, it went into the pile.

I'm glad I grabbed this one. The story starts with Harley busting the Joker out of prison and trying to pull of a caper for him because he's "too hurt" to do it himself. In reality, Joker wants her to fail (their relationship is a bit complicated). In a bizarre twist of events, Harley breaks up with the Joker and declares her independence. She spends a caper trying to "hench" for Two Face before she has a sleepover with other villainous women (Catwoman, Poison Ivy, a bunch of ladies I didn't recognize), and then decides to form her own criminal gang. All the while, Harley is being hunted by two bodyguards and a former FBI profiler at the behest of a Mr. Happi, a multimillionaire who almost died at Harley's hands at the beginning of the book.

Complicated? A little. A fun read? Absolutely. Harley's capers are hilarious. Nine times out of ten, they don't really work and, in some ways, it seems like the writers are setting her up as an unintentional hero. Sure, she's trying to commit crimes, but she never quite makes it.

Which helps explain one of the oddities of the book: the complete lack of Batman. You'd think he'd be all over Harley (in the "busting a criminal" kind of way) but he never shows up (except for once in the background). But that actually works since nothing Harley's done so far has risen to the level of "must be stopped by the Dark Knight."

It's clear from the end of the book that there will be other volumes in this series. You know I'll be watching for them. I can't wait to see what Harley does next.
Posted by John at 8:22 AM