Maybe it's just me, but I'm thinking that this month's book should have been scheduled for next month. I mean, I did the math last week and realized that April's blog tour will fall smack in the middle of Holy Week. What better time to discuss Mike Duran's book, The Resurrection? I mean, I could have discussed the connection between Easter, this book, and 1 Corinthians 15:12-21, thus giving me some "warm up" for Easter Sunday. But no, this had to fall in the early days of Lent, when my mind is befuddled from my yearly caffeine fast. Sigh. Missed opportunities.

Okay, so I'm only kidding. Truth be told, there's no way I'd be able to participate in a blog tour during Holy Week. Stress levels and all that. Hence why I'm abstaining next month. So instead of wallowing in might-have-beens, let's discuss the book instead (which I received for free for reviewing purposes). 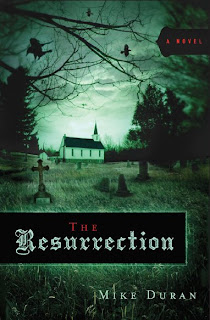 This story centers around two people in the small west coast town of Stonetree. The first is Pastor Ian Clark, a young minister who is struggling with his faith. He's faced some pretty difficult crises before landing at Canyon Springs Community Church and now he's had enough. He's ready to quit it all and leave, but one thing stops him from carrying out his plans, namely the person of Ruby Case.

In many ways, this story reminds me of This Present Darkness only without the angelic warriors zipping all over the place. And in my eyes, it actually pales in comparison a little. While I enjoyed reading this, I couldn't shake a feeling of "almost." The story almost makes it. The conflict almost completely engages me. While Duran writes the story with a great deal of passion, it seems like he doesn't quite make it from "okay" to "great." It's an okay read and that's about it.

I think part of the problem is that Duran doesn't quite focus on one aspect of his story. Is this a story about spiritual warfare? Is it a story about the place of miracles in modern-day faith? Is it a story about maintaining faith in the face of difficulties? The answer is yes to all three questions, and that only muddied the waters of the story just enough that it kept me from being completely engaged. Plus there was a problem that I realized with the story, one that I'll discuss at length tomorrow.

So in the end, I guess I'd have to say that this is an okay story. Not phenomenal but not awful either. Maybe I'm the only one who thinks that, but there's only one way to find out. Go and see what the other tourists have to say:

Looking forward to what else you'll have to say, John. I think that not focusing on one aspect is interesting. I'm not sure I think a writer has to pick one. But I suppose that depends on whether or not readers think all aspects are handled well.