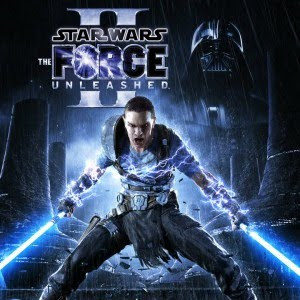 Okay, so let's talk The Force Unleashed II. I received this game for Christmas, the PC version, and today, I was able to finish my first play-through.

When last we saw Starkiller, Darth Vader's secret apprentice, he was . . . well, dead. At least, he was if you played the first game and chose the light side path (which, since this is a Star Wars game, should always be considered the "canonical" ending). So Vader goes to Kamino, the same place that the clone troopers from the prequels were ginned up. He clones Starkiller to mop up the Rebellion, only to have the clone break free and escape. He wants to find Captain Juno Eclipse, his . . . well, I guess his romantic interest (although they never really built on that in the first game). This chase brings him all across the galaxy until he finally has to return to where it all started and face Darth Vader again.

If you're a long-time reader of my blog, you know I had buyer's remorse, so to speak, with the original game. Well, some of that surfaced with this one too. There were odd graphical bugs that popped up from time to time (such as scenery appearing out of nowhere or Darth Vader disappearing during the climactic fight). Thankfully there were no real issues with the sound.

When the game was working (which, admittedly, was most of the time) it was very pretty. You could tell that the artists had spent a lot of time on the scenery and so on. The first time I took out a jump trooper I smiled, simply because it was so funny to watch them sail around the level, out of control. So graphically, I guess the game was about average.

In terms of controls, I had to re-jigger them a little (an issue with my mouse that shouldn't affect most people). My one complaint with the natural key-bindings was that it was too easy to "lock" Starkiller onto a target when I was really trying to use Force lightning. That led to a few times when I had to restart a level because I couldn't face the person beating me up.

As far as the gameplay itself, the game suffered a little. You have the usual plethora of stormtroopers (not nearly as diverse as the original) along with some droids and Force adepts. The problem is the sheer repetition of the opponents. Toward the end, I had figured out everyone's Achilles heel and there wasn't much challenge to it.

What really made me cringe was the story. In some ways, the game was too short. I've read one review that said the game felt more like an expansion pack to the original and in some ways, that criticism is valid. But what really got me was the ending of the story.

Relax, no spoilers here. But let's just say that I had a hard time believing what happened in the light side ending, especially with Juno. There, that's all I dare say. Play through the game yourself if you want to see what I mean. But maybe wait until the price comes down first.
Posted by John at 9:27 PM