CSFF Blog Tour: The Wolf of Tebron Day One 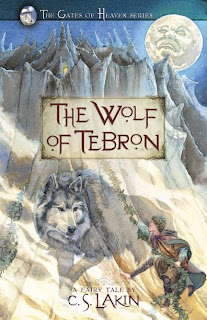 Happy New Year, fellow tourists! We're kicking off the first blog tour of 2011 with C. S. Lakin's The Wolf of Tebron, a new fairy tale about a young man who has lost his wife.

Joran is an apprentice blacksmith who has lost his wife, Charris, who disappeared on a journey to see her parents (although that isn't the full story). Joran grows increasingly worried about her until the goose woman, an apparently insane old woman in his village, reveals that Charris has been captured by the Moon and only Joran can free her, but only if he can loose three keys and not before he wears out three pairs of shoes.

Joran sets out to confront the Moon but along the way he befriends a large wolf named Ruyah who agrees to go with him on his quest. But the way is perilous and Joran quickly discovers that this journey is going to change him in ways that he can't even begin to imagine before he can bring Charris safely home again.

So let's talk about this book from a strictly craft point of view. Lakin's voice is a bit detached from the action. At least, it seemed that way to me. But the more I dug into the story, the more I dug the detachment. Lakin doesn't set out to tell a modern fantasy story (so to speak), but instead is trying to evoke a fairy tale, a genre that "gets away" with a more omniscient point-of-view. Instead of cramming a contemporary voice into a mystical tale, Lakin ably creates the atmosphere of an old fairy story with her tale as Joran travels the world, looking for his lost wife.

I also appreciated the somewhat episodic formula she used for her book, breaking Joran's journey down into distinct phases. It turns out that things are not as simple as the goose woman made them sound: Joran simply can't go to see the Moon to release Charris; no, that's just the first stop along the way. Lakin puts each leg of Joran's trip into its own section and it worked out really well.

Having said all that, I think there were a few places where Lakin's story sort of fell down on the job. The subplot about the wizard seemed a bit tacked on, almost to the point where I forgot about it until halfway through the book. Then, when I remembered it, I kind of scratched my head and thought, "Huh, I wonder what that had to do with anything." Yes, Lakin tries to weave that in at the end of the story, but it didn't feel as seamless as it could have. At least, not in my opinion.

The one thing that really bothered me was the extensive use of mindspeaking. Joran has the ability to telepathically communicate with animals and they can respond in kind. While this idea isn't exactly unique (Donita K. Paul and Jill Williamson make use of similar abilities in their books), Lakin's execution wasn't the best. She designated such exchanges by putting the mental dialogue in italics. That, in and of itself, is not bad. Like I said, that seems to be the standard way to handle this. What doesn't work is the fact that Lakin includes lengthy telepathic discourses and doesn't consistently designate who is speaking. There were times when Joran or Ruyah launched into a lengthy speech spanning multiple paragraphs and I couldn't be sure when one stopped and the other began. It wasn't as clear as it could have been.

At the same time, I can't deny that Lakin created some truly memorable scenes. I appreciated the way she wove in the different natural forces as embodied persons. Sola and her seemingly modern encyclopedic knowledge made me chuckle. And there's definitely a sense of wonder that streams through the whole story.

In the end, I'd guess I'd say that while this book was an enjoyable read, it was sort of a forgettable one. It never really grabbed me the way some books have in the past. And once I was done, the details of the story sort of faded away, like an early morning mist.

But don't just take my word for it. Go and check out what the rest of the tourists have to say: