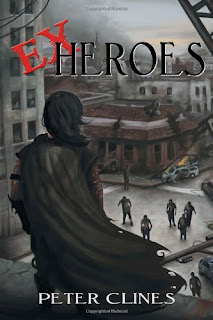 So a few weeks ago, I was poking around Amazon looking for superhero novels. I was surprised at how many there actually were out there. But one that caught my attention was Ex-Heroes by Peter Clines. It's a zombies vs. superheroes mash-up novel, an interesting combination, so I had the thing beamed to my Kindle (is that the right term? Zapped? Downloaded?). And I'm really glad that I did.

It's the zombie apocalypse and one band of survivors in Los Angeles have settled in a former movie studio lot, watched over by some of the last superheroes in the city. There's Saint George, who is impervious and spits fire. There's Gorgon, who has vampiric vision. There's Zzzap, a living electrical storm. And organizing them all is Stealth, an enigmatic woman who never shows her face. It's not paradise, but they're making it.

But all is not well in the fallen City of Angels. A new force is mustering outside the studio walls, one that threatens to tear their sanctuary apart, especially since it will reveal a dark secret one of the heroes has been keeping this whole time.

This was a fun read. Clines's heroes are all original and vibrant. It's easy to see that he's given a lot of thought into how people could survive a zombie apocalypse. Clines kept up the pace throughout, intermixing the present storyline with "flashbacks" in the heroes' own voices. There were only a few places where the plot seemed to drag, simply because of extended fight scenes.

If I have any gripes, there are two and they're small ones. I didn't like the flashback chapter for Cairax, one of the heroes. While the other flashback chapters were stories told in first person, Cairax's chapter was a conversation with another character. Don't get me wrong, it was well done, but it stood out since it was so different.

My second gripe had to do with the way Clines used one character in the final battle. It seems to me he had a pretty massive deus ex machina up his sleeve that he sort of used once and could have conceivably used two other times. I don't understand why he didn't. It would have ended the battle a whole lot quicker, I would think. Unfortunately, there was no explanation given why it wouldn't have worked.

But none of that diminished my enjoyment of this book. Definitely a fun read.
Posted by John at 8:00 PM

Hmm, sounds interesting--and most importantly, like my kind of book! I'll have to check it out soon.