At the Queen's Command 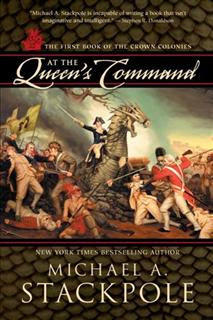 I hate to admit, I was a bit hesitant to read this one.

Let me explain. I first discovered the writing of Michael Stackpole for a while now. Admittedly, I discovered his Star Wars novels first (and to this day, I still maintain that he's the best Star Wars author out there; sorry, Timothy Zahn), but then I discovered his other books and thoroughly enjoyed them. All of them except his last books, namely his Age of Discovery trilogy, which fell a little flat for me. So when I saw At the Queen's Command, I was anxious to read to it but still, just a little worried.

It turns out I didn't have to worry all that much. This was an excellent book if a bit predictable. The concept is pretty cool, basically a reimagining of the events surrounding the American revolution in a time when there is magick, dragons, and necromancers.

Captain Owen Strake, a Redcoat of the Queen's Own Wurms, is sent from Norisle to her colonies in Mystria to scout the territory of New Tharyngia. Strake has left behind his wife, Catherine, and entered an alien world, one filled with strange creatures, strong willed colonists, and the mysterious natives, the Twilight People. Owen has seemingly been given an impossible task, one that many have failed to do in the past. But things get worse when he finds out that a powerful wizard from the continent, one who has nefarious plans for the Mystrian continent and its people.

By and large, this is a fun read. Stackpole is great at world building and while he's basically reshaping the known world and relabeling it (Mystria for America, Norisle for Britain, Tharyngia for France, that sort of thing), he keeps things believable and consistent, especially when it comes to magick. I almost wish he had spent some more time exploring the relationship between magick users and the Church, because oddly, the Christian Church is present in this book.

The characters are great and fun to be with, even if the Mystrian good guys are a bit too good and the bad guys are all incompetent, pure evil, or varying combinations of the two. More problematic was the predictability of the plot. I unraveled three or four twists (some of which won't be coming until later books, I think), so when they happened, I wasn't surprised. Instead, I was actually a little disappointed since I had figured it out.

That being said, I really enjoyed this book and I can't wait for the sequel to come out.
Posted by John at 8:48 AM