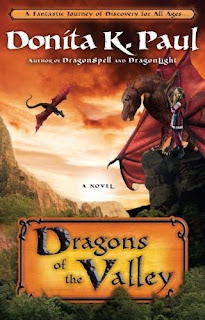 Once again, we find ourselves in prequel mode, following a series of adventures that took place before the events of Paul's original DragonKeeper books. Once again, the statues that make up Trio of Elements are in danger and so our bold heroes spirit them away to safety. But even with the powerful statues hidden, things are not well in the kingdom of Chiril, for their neighbors, the Baardackians, are infiltrating Chiril and seem intent on conquering them. That would be bad enough, but they have apparently hired a creature known as the Grawl, a terrible man-beast that could spell Chiril's doom. Can the Wizard Fenworth, Tipper Schope, the newly minted Paladin, and all of their friends and allies turn back the tide? Or will Chiril fall to pieces and with it, the rest of Wulder's world?

For the most part, I enjoyed this book. There's a lot of adventure and derring-do, set in Paul's absolutely delightful world. I simply can't get enough of the rich detail and history that she's worked into this, especially with the minor dragons and their abilities, the different high and low races. All together, it's a fantastic work of art.

I also loved Lady Peg's conversations with Groddenmitersay. Awesome stuff. Actually, any time Lady Peg opened her mouth was fun. And I also liked the way that Paladin has been growing into his new role. Very cool to see that also.

That said, there were a few minor trifles that bugged me, possibly just a matter of opinion. Three in particular stand out.

For starters, we got dumped into the story so quickly, I had a hard time regaining my bearings. I'm not entirely sure that this story can stand alone on its own. One probably should read The Vanishing Sculptor first to understand the relationships between the characters and what the Trio of Elements even is. Since it's been a while since I read the first book, I was a little lost as I read this one. Not a big deal, I suppose, but it was a little daunting.

Second, the romantic subplot seemed a little tacked on. Or rather, the end to it did. I liked the fact that Tipper seemed to be in a sort of love triangle and it added some zest to the story, but it all got resolved too quickly at the end.

And actually, that brings up the third thing as well. The whole story seemed to get tied up in a neat little bow too quickly. One minute, the Baardackians have overrun Chiril, the next minute, they're pretty much smashed into splinters. I don't know. It just seemed too quick to me.

Well, that's about all I have. I know usually I post for three days but I don't think I have it in me this time around. Be sure to check out what the other tourists have to say about this great book:

Good job on your book review. Your perspective about the beginning of the story seems to be shared with most of the other reviews I've seen. I share that opinion too. That said, it was an enjoyable tale!

I wholeheartedly agree with your remarks about Lady Peg! And about the romantic sub-plot, actually. That didn't engage me as much as the rest of the story. Still, I had a fun time reading the book.

Good review, John. I had no trouble with the beginning other than ... well, I need to save that for my review. What I mean to say here is, I had no problem jumping back into that world.

I do think a summary page would help new readers like Dave, though there are lots of helps with the map and Appendix--just not a plot summary of the previous book.

I suspect this is for marketing purposes, but could be wrong about that.

Oh, maaaaaaan! said in high, squeaky voice. I thought I was getting better at endings. You are not the first to say I rush the ending. Sigh. I'll try harder on this book. And yes, the romance was not central as I was avoiding doing a romance instead of a fantasy. Balancing act is what it is!

Interesting review. I agree Mrs. Paul's world is filled with rich detail, which is what appeals to me and most other readers.