CSFF Blog Tour: Hunter Brown and the Secret of the Shadow Day One 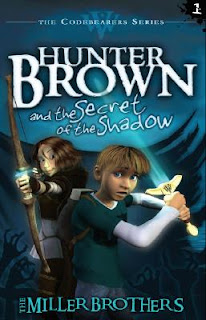 This one's going to be a little rough. I wanted to like this one, I really, really did.

Hunter Brown and the Secret of the Shadow is a young adult Christian fantasy book that centers around a young man named ... well, you guessed it, Hunter Brown. Hunter seems like your typical "geek" outcast at school, only he's drawn into an adventure when he's given a mysterious book. The book transports him to a place called Solandria, where he joins up with a group called the Codebearers. The Codebearers are fighting the evil forces of a being named Sceleris, personified by an evil wizard named Venator. Can the Codebearers defeat the evil Shadow and will Hunter ever make it home?

Okay, now that the plot is out of the way, let's discuss why this book really didn't do it for me.

For starters, there's the fact that it's young adult fiction. Let's face reality. I'm twice the target age as the intended readers, so while I could enjoy the tale, it didn't really grab me. Maybe this would be good in the "right hands," so to speak, but those hands don't belong to me.

Second, there were craft issues that drove me up the wall. For example, the Miller brothers kept using improper speech tags all the time. We had people "smiling" their words, or so on and so forth. I've heard it many, many times before: when writing dialogue, only use "said" or "asked" and not much else. Every time I hit an improper speech tag, it jarred me a bit. There were point of view problems as well, where Hunter suddenly knew what was happening in another person's head.

Now by saying that, you may think I'm judging the Miller brothers harshly. Maybe I am. But I say these things as someone who has committed these writing craft sins in the past. Maybe the rules are a little more lax when it comes to YA fiction, I don't know.

And thirdly, the book was too preachy. The allegory was paper thin and easy to see through and that made it less enjoyable for me. Again, maybe this is something that works for YA fiction, but it didn't really do much for me.

Again, this might all be because I'm an adult reading a book intended for readers half my age. I've had this problem before (see my review from a six months ago about Twilight). Maybe if I pass it on to a young adult, said young adult will get more out of it. I have no idea.

And maybe it's just me. Tell you what. Go check out what the other tourists have to say:

Encyclopedia Brown is YA, pretty good, and enjoyable even when you're not the target age group. Why should Hunter Brown be any different?

No one likes bad writing. It just gets published sometimes.

However, I didn't see the "paper-thin" allegory as a problem. If you're going to use allegory, why not make it thin? Isn't that more effective than allegory that is so "thick" readers can't get through it? Especially in a book for kids? And I found the book to be less simplistic than I thought it would be -- to my mind, it addressed some pretty deep issues without giving pat answers. The biggie would be its questions about free will and whether God is just "using" people. That's a question I hope the Miller Bros. will continue to address in future books.

Rachel, you've given great insights into the things John brought up.

First the craft issues. I know it isn't an excuse, but by way of explanation, Warner Press doesn't do fiction. If you visit their site, you'll see info about cards, bulletins, wedding supplies, activity books and the like. This is a big stretch for them. And I think they did a lot right. You should have seen the promotional brochure I was given that brought me to check out the book!

I also love the quality of the cover--for paper is is great, in my opinion, not too stiff but not the easy-tear variety some publishers use. I love the pages--brown on cream, with the "stained" edges. I love the use of varied fonts, the map, the "handwritten" notes at the beginning and end. They did a lot, a lot right.

And the "craft" things we saw? Readers who aren't writers won't notice those. Yeah, the truth is we can't smile a line of dialogue, but until someone wrote that rule down, I read a lot of fiction that had the characters smiling their dialogue. I didn't care. Same with the minor point of view breaks. Yes, they were there, but readers are probably going to be caught up in the action and won't notice.

As to the allegory--John, allegory IS transparent. Did you think John Bunyan was being subtle when he named his character Christian? Or when he set him on a road to the Celestial City?

The fact is that allegory has gotten a bad rap because some books that have used transparent symbols have been labeled allegory.

Very few books are truly allegory, and Hunter Brown is no exception. It is allegorical, in that the fantasy elements the Brothers correlated to actual elements--the Author, the Code, Codebearers, and so on--are consistent throughout the story. But clearly not every story element is intended to represent a corresponding real element.

Another excellent point you made, Rachel--the truths were anything but simplistic. The Brothers tackled some of the knotty theological issues head on. Good for them! May we have more Christian authors who go with their fiction.