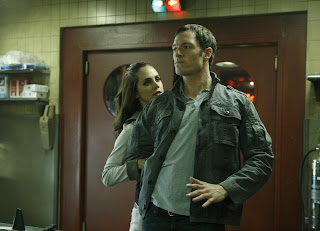 I wrote a review back when Dollhouse debuted. At the time, I said I was skeptical about the series's premise. I also said I was concerned about Eliza Dushku's ability to drop in and out of different roles week to week. Sadly, with each successive episode, my doubts grew. Why do people go to the Dollhouse and rent actives? And Dushku's acting, while okay, wasn't spectacular. For example, in the episode where Echo infiltrated the cult, she broke character toward the end in what I thought was an unrealistic way. So I was a bit skeptical about this week's episode, Man on the Street. The previews promised that it would be a game changer. So I figured I'd tune in to see what changed exactly.

Well, the episode certainly delivered some good twists. FBI Agent Ballard encountering Echo twice was a nice surprise. So was Ballard finally realizing that his neighbor, Mellie, is into him. Patton Oswalt's rich billionaire Dollhouse client helped me understand why people would go to the Dollhouse.

But it was the twists that piled up in the final fifteen minutes that really hooked me. A mole inside Dollhouse? The revelation that there are more throughout the world? The whole "fantasy is our business, but the purpose is different" revelation? And who Mellie really is? Wow. I'll keep watching just to see how this all develops.

I want to add one more thing. I have a theory about who Alpha, the rogue former active, is. Maybe it's been suggested elsewhere, but I'm going to go out on a limb here and predict that Alpha is really Agent Ballard. I think that Alpha has developed a multiple personality disorder, both of which wish to see the Dollhouse taken down. It's just that Ballard isn't aware of Alpha, but the opposite isn't true.

Am I right? Who knows at this point. But I'll keep watching to see if I am.

I agree about last night's Dollhouse! It definitely got me hooked as well. I was only watching the show because I was a fan of Joss and was waiting for FOX to give him more freedom to create the series he wants.

I've read in several TV blogs that Alan Tudyk will be playing Alpha. It should be fun! He was quite the character on Firefly/Serenity.

I had not heard that about Alan Tudyk. That would be very cool. Okay, I withdraw my ill-informed prediction.