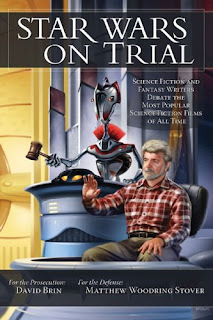 So in the interest of full disclosure, let me say this: I'm a Star Wars fan. No, fan is not strong enough. "Geek," perhaps. I own all six movies. No, that's not strong enough either. I"m one of the suckers who kept buying the progressive edits on the original trilogy that George Lucas kept ramming down our throats. I've played at least a dozen Star Wars themed computer games and still think one of them, Knights of the Old Republic, contains a fantastic story. I owned dozens of the novels.

And yet, in spite of my fandom, I have to admit a great deal of frustration with Mr. Lucas. While the original trilogy inspired me, while the books built on the foundation of his creation, he really wrecked things up with the prequel trilogies. Far too many plotholes. Far too many missed opportunities. Far too many clunky scenes, horrible dialogue exchanges, and wooden acting. Unfortunately, my love affair with the series has waned a bit in recent years.

Some of you may know this already. About six months ago, I had some fun by creating a series of campaign commercials around the plotholes. If you haven't watched them, click the link. It'll waste maybe only ten minutes of your life. Twelve tops.

Anyway, even though I may not be as rabid of a fan as I once was, I still swing through the sci-fi section of Barnes and Noble every time I'm there to see what's new. And one time, I spotted this book: Star Wars on Trial. Needless to say, I was interested. I flipped through it for a few moments before putting it back. Maybe I'd get to read it someday.

Thanks to my mother-in-law and Christmas, someday finally came.

Basically, two men (David Brin for the prosecution and Matthew Woodring Stover for the defense) put Star Wars on trial (hence the title). Eight charges were brought against the movie franchise:

I don't get into essays all that much, but this was a pleasure to read. The people who wrote them took them seriously. Or as seriously as the subject matter warranted. Many excellent points were raised by both sides and I did some serious thinking about the series from which I've derived so much pleasure. There were some interesting alternate takes on what the series is all about. Perhaps the most interesting thing that came up is that one of the biggest villains in the series is not Darth Sidious or Darth Vader. It's Yoda. The prosecution labels him a "nasty green oven mitt" and the kicker is, nobody leaps to his defense.

After looking over what everyone had to say, my opinion is that the prosecution pasted the defense. Brin's side put together some very persuasive arguments, many of which the defense conceded with a "Yeah, but so what?" counterargument. The screwy thing is is that even though he was definitely behind on points, Stover managed to squeak in a victory with his closing arguments. It's not a clean win, but it's still a win.

If nothing else, this book has helped me make something of a resolution. I know, mid-March isn't exactly the time to do that normally, but just go with it. I've noticed that my reading patterns for the past few years have been stuck in the same two "ghettos," namely Star Wars books and Christian fiction.

Not that I'm knocking either. I'm not planning on giving up the latter. The fact that I'm posting this in the middle of a blog tour should tell you that. But I am going to try to stretch my legs a little. Time for me to read some classic sci-fi. Research Nebula-award winning books and see what they're about. Expand my pallette.

It may take a while. I've always got a stack of books to read. Shuffling in some new stuff might not happen immediately. But there you go. If you're a Star Wars fan or want to read some interesting takes on both Star Wars trilogy, then this is a great book for you.

Oh, I knew I liked you, but when you posted about KotOR, that sealed the deal (the commercials about Obi-Wan? Icing). What a great game. You want geekiness? I'm still officially an admin for a KotOR fan fic site (Not much action since we never got a K3 after The Sith Lords was a story wreck).

Anyway, thanks for distracting me from the CSFF tour! Impressive...most impressive.