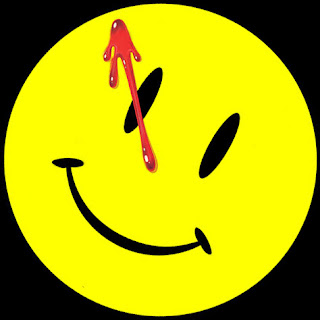 After watching Watchmen earlier this afternoon, I'm pretty sure that Alan Moore is right.

For those of you who don't understand, Alan Moore is the writer who created Watchmen, an absolutely phenomenal graphic novel that turns just about every superhero convention on its ear. Gritty, wild, and extremely well written, Watchmen is densely packed with plot, time-bending scenes, and such a rich story and characters that it's a true work of art. And Moore firmly believes that no one should have tried to adapt his story for the big screen.

Given how incredible the source material is, the movie version came in with a considerable handicap. They tried to cover as much as they could in the opening credits, but really, that's not good enough. I seriously wonder if someone who hasn't read the graphic novel could really follow the plot the way the movie told it.

But it's not just the source material that handicapped the movie. Zack Snyder, while called a "visionary director" in the commericals, was in over his head, I think. He often tried to simply dump parts of the graphic novel into the movie, stuff that should have been adapted instead. For example, some of the lengthy narration that went on. I was okay with the inclusion of Rorschach's journal as a voice over, but when Doctor Manhatten started doing voice overs as well, it just detracted.

But the times that Snyder tried to adapt the material, he did it in a ham-fisted way. For example, Laurie's conversation with Doctor Manhatten on Mars. In the original, this is a great scene, with the conversation slowly teasing out a major revelation from Laurie. In the movie, it's just dumped in with a magical zap.

And while artistic license is a thing that can and should be exercised, the few times the writers of the screenplay used it, I think they weakened the story. For example, the ending and the lack of the squid (if you don't understand, go read the graphic novel. It's worth it). What the writers came up with instead would have caused more problems than it would have solved. It's hard to go into here without revealing spoilers. Another example: how Walter Kovacs truly became Rorschach. It was a lot more clever and powerful in the graphic novel. In the movie, it was just needlessly gross.

Which brings me to another gripe. It seems that Snyder decided to just amp up the sex and violence to the nth degree. Now there is a lot of violence and some sex in the source material, but in the graphic novel, it's more the hint of the true violence, and the sex happens, by and large, off screen, so to speak. Not in Snyder's version. Bursting entrails, graphic sex scenes, it was way over the top and, I thought, unnecessary.

There were definitely some bright spots to the movie. Jackie Earle Haley's portrayal of the pscyhopathic Rorschach was spot on and great. He was awesome. And a lot of the fight scenes were well choreographed. But someone really needs to take away Zack Snyder's slow-motion button. He can have it back after he makes a full movie without it.

So should you see it? Hard to say. I wasn't impressed. Maybe you will be.