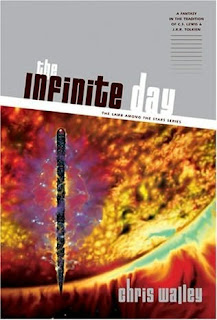 This one took me a while to read. Not surprising since Chris Walley's The Infinte Day weighs in at a whopping 576 pages. It was a hefty book to work through.

The story picks up where The Dark Foundations left off. Commander Merral D'Avanos is heading off to the Dominion to rescue the thirty hostages kidnaped by the Margrave Lezaroth. That's a troubling prospect since that means they'll need to travel through Below Space, a realm of grayness where evil lurks around every corner.

But that's not the only problem they're facing. Another group has left the planet Farholme and is headed toward Ancient Earth. And none of them are friendly toward Merral and what he's trying to accomplish. What kind of impact will they have at the heart of the Assembly?

And then there's the Dominion itself. Lord-emperor Nezhuala is preparing his forces to invade the Assembly. What plans does he have for God's people and what, exactly, is the Blade of Night supposed to do?

If you're a regular reader of my blog (one of the two or three), you know that I was a bit ambivalent toward the first book in this series but I absolutely loved the second. So I was quite anxious to get my hands on this book and see how the series wrapped up. On the whole, I was satisfied with the book but it wasn't the best of the three.

Part of the problem were a few story choices that Walley made throughout. Call it "Monday morning quarterbacking," if you will (I'd love to find out what Vero would make of that phrase), but as I read, I kept trying to guess what Walley was going to do. There were a few times when what I guessed seemed a lot more fun and interesting. It's not that I think what Walley came up with is "wrong," but they weren't choices I would have made. It's a personal thing.

There were a few points when Walley also made some craft choices that bugged me. Toward the end, he popped into "narrator mode" and spoke directly to the reader. He did this toward the end of the book and, seeing as he hadn't done it before then or in either of the other two books, it was a bit jarring. It might have been better to fold the information into the story somehow.

I also had a theological problem with the way the conflict with the Dominion ultimately ended. I wish I could go into detail, but if I do, I'll basically drop a massive spoiler right here. Not gonna do it. Let's just say that it seems like Walley was saying that humanity pulled a trigger that only God should have had access to. I hope that's ambiguous enough.

All of this is not to say that I didn't enjoy this book. I really, really did. It was great to see how Walley created this futuristic world. What was really cool for me was the fact that he did so using post-millennial theology as a basis for his story. Seeing as so much eschatological fiction is based on dispensational premillennialism, this was a breath of fresh air. And, I have to say, his depiction of the rapture was so, so right. So right.

The last thing I have to say is this: I still do not understand why this series is classed as "fantasy." It's so not. It's science fiction, through and through. Sure, there are fantastical elements to it (such as the Below Space manifestations and Nezhuala's powers), but those simply added color to the story.

Whatever. Not important, I suppose. What does matter is that this is a great series. If you're a fan of Christian speculative fiction, you'll want to read the whole thing.