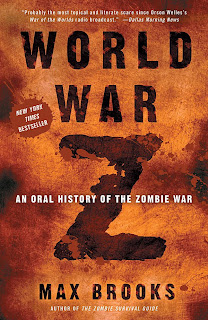 Believe it or not, I'm not big on zombies. Seriously, I'm not. I know that my current avatar on Facebook and this blog is that of me as a walking dead. That has more to do with fighting the undead with garden plants than anything else. I have never seen a zombie flick (oh, wait, I did see Shaun of the Dead) and I really don't want to.

So why on earth would I pick up World War Z by Max Brooks? To be perfectly honest, I have no idea why. I know a classmate of mine from Seminary recommended it recently. I can vaguely recall positive reviews when it first came out. So when I saw it in a stack at a local Barnes & Nobel, I took the plunge.

I am so, so, so glad that I did. I may not be a fan of the undead, but Brooks crafted a book so gripping, so wonderful, I devoured it.

Brooks has a big job on his hand: tell the story of the zombie apocalypse. A global pandemic causes the recently deceased to rise again. The shuffling masses are out for human flesh and are well nigh unstoppable. So how does an author tell such a huge story?

By created a faux oral history, the way Studs Terkel used to do. We never really get a huge, bird's eye view of the story. Instead, we see little bits and pieces of it, just enough to get a taste of how it happened. We follow a Chinese doctor as he encounters one of the first outbreaks. We see snippets of the "Great Panic," as waves of the undead destroy society. We watch people around the world try to survive and rebuild. And then we march with the world's military as they leave the safe enclaves to retake the globe.

The remarkable thing about this book is how realistic it is. Yes, I know, the dead don't rise (this side of parousia, anyway, and without divine intervention), but that's not the point. I quickly realized that as far-fetched as the central premise is, Brooks crafted realistic stories. I caught myself nodding, thinking, Yes, that is how it would be. It really struck me as I read one soldier's account of the Battle of Yonkers. Brooks obviously did his research on all manner of topics, weaving them into the accounts.

Not all of the stories resonated with me, but there were a lot that just grabbed me and wouldn't let go. I'd love to list them all, but I honestly don't think I could.

What really surprised me was that the stories, while depicting swarms of flesh-eating zombies, a horror movie staple, the book itself was not as scary as I thought it would be. Nor as gross, either. There were a few eyebrow raising details, but nothing that made me want to stop reading.

This book was awesome. It's just that simple. I don't know if it'll be for all people, but it certainly was for me.
Posted by John at 9:36 PM

It's a fantastic book; it reminds me very much of various war stories I've read. And it's almost journalism more than it is fiction.

I'm not a big horror fan, but in the past couple of years, I've been reading a lot of zombie stuff: WWZ, and Walking Dead, especially. If you've not read WD, you really should. It's a graphic novel; Robert Kirkman is the author on it. It's chilling. I think it's easy, with zombie stuff, to say it's gratuitous violence but there's none of that in Walking Dead. It's very violent, but every bit of violence is there for a purpose.

The audio book is supposed to be amazing--star-studded cast and all that. It's never available at the library so I haven't been able to listen to it yet.