Well, I think I've almost recovered from my weekend in Indianapolis. I was there for the annual ACFW Conference. Admittedly, as of six months ago, I was sure I wasn't going to go. But I made the trip and I'm so glad that I did.

For starters, there's all the cool people that I met, far too many to list here. Not only that, but I also reconnected with a lot of friends as well. The awards banquet in particular was a blast. We got a bunch of YA and speculative fiction authors together for what I affectionately call "the rowdy table." 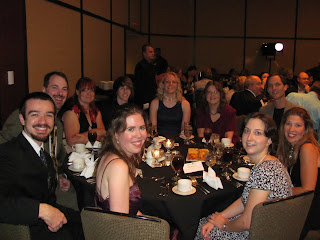 Okay, so we weren't rowdy per se. Very well behaved, as a matter of fact. Although Jeff Gerke of Marcher Lord Press and I tried to hijack the banquet's live blog feed and were stopped in our nefarious plan. Oh well. 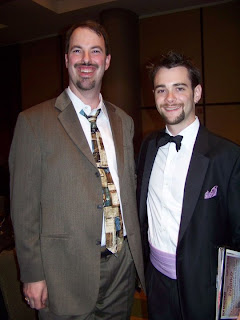 That's one of the things that makes the ACFW Conference so much fun. Reconnecting with "old" friends (like Ben Erlichman, who isn't really old in terms of age or friendship length; I only met him last year) . . . 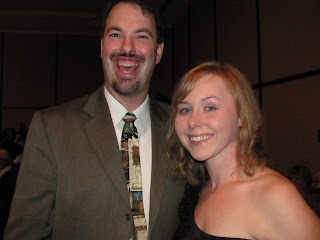 Plus there's all the courses. I learned a ton of stuff from lots of industry professionals. And yes, I can get a little more specific than that, why do you ask? I took courses on legal pitfalls, both in the real world and writing legal scenes. I sat in on a mock publishing board meeting. Best of all, I think, was the marketing class with "the bad boy of the CBA," agent Chip MacGregor and best-selling author Jim Rubart. It was like drinking from a fire hose. But I did come away with one great thing. I think I have my brand.

If you haven't noticed by now, I'm a bit of a geek. No, it's true. You can say it. I'm well aware. Currently I have a zombie as my blog's avatar. In the past, I was a Vulcan. I blog about video games (the demo of Civilization V is downloading as I write this). I write sci-fi and fantasy (more of the former lately). I'm a liturgy nerd and a freak when it comes to Biblical history. It's who I am. I know it. I live it. It's part of who I am by the grace of God.

So I'm all about "Geeky Grace." It's who I am. It's the kind of stories I write. And I think it's my brand. An on-line friend (and, by a strange coincidence, a neighbor of mine . . . long story) actually put together a logo for me: 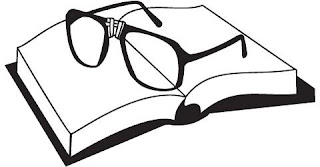 I've got some ideas of where to go with this, but nothing set in stone. Stay tuned, I guess.

And of course, there are the meetings and appointments with editors and agents. I primarily went to the conference to pitch Failstate, my YA superhero story (although I did talk to one editor about Numb). I was asked to send in chapters and proposals, even a few full manuscripts. The most frightening (for me) was when an agent requested a full manuscript of Failstate, but only if I can cut 30,000 words from it first. Wow. Not sure where to start there, but I'm getting out my literary chainsaw and getting to work on that soon.

In the meantime, I'm settling back into my routine here. But I am playing with the idea of writing a new short story, something that occurred to me while I was in Indianapolis. Time to get cracking.
Posted by John at 9:03 PM