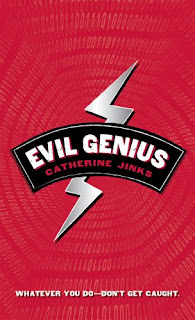 So how much effort should eight dollars actually earn?

I just got finished reading Evil Genius by Catherine Jinks and, I've got to say, I think I came out short in terms of the whole money spent to effort put out (by me) ratio. To put it bluntly, this book was horrible.

In theory, this should be a good story. At an early age, Cadel Piggott discovers an interesting truth about himself: he's actually the son of the infamous Dr. Darkkon, a mad genius bent on world domination. Cadel, it turns out, has inherited his dad's impressive intellect, especially when it comes to computers and complex systems. In his tween years, Cadel uses his genius to cause traffic jams and train delays. As he enters his teenage years, he's skipped ahead through high school, where he begins to study human interactions. And finally, at the age of thirteen, he attends a special university, the Axis Institute. This is an institution of higher education where the students study such courses in Forgery, Embezzlement, Misinformation, and Pure Evil, which are taught by some of the greatest criminal minds the world knows. In short, it's a college where the students are being trained to be supervillains.

Awesome, right? Sort of an evil Hogwarts. But as great as the basic premise is, Jinks botches the delivery almost completely.

For starters, there's Cadel. For at least the first half of the book, Cadel doesn't have any sort of ambition for himself, by which I mean he has no long-term goals. He doesn't actually want anything in terms of the "big pictures." As a result, he just sort of drifts through life, pushed this way and that by Dr. Darkkon and the doc's henchman, Dr. Thaddeus Roth. They basically dictate what Cadel will do and when he will do it. They suggest he try some new nefarious scheme; Cadel obediently does so. He's spineless. He's a sponge. He's not very interesting. He doesn't really develop any "big picture" desires until 250 pages into the book. That's half of the story! If I hadn't actually paid for this book, I probably would have stopped reading long before Cadel becomes . . . well, a person.

More problematic is the fact that there doesn't seem to be an overall plot to this book at all. There's just a bunch of random happenings in Cadel's life as he grows up and goes to the Axis Institute. Now, to be fair, I got the idea that there was something bigger happening behind the scenes at Axis, something about a plague kept in a vial (I think). And apparently Darkkon had some sort of ulterior motive in staffing the Institute that's never really made clear (until one guy comes out and states it after it's all said and done). But these plots never really seem to intersect with Cadel in a meaningful way. He just notices little corners of them from time to time before he drifts off to another boring part of his existence.

What really frustrated me was how vague Jinks was at times about Cadel's actions. For example, at one point, Cadel decides he needs to take revenge on his high school classmates before they graduate. Why is never really explained. And we're told that he does a lot of planning for it. And we're told in a single sentence that Cadel succeeds in his revenge. But we're never shown how he accomplished this or what, exactly, he hoped to accomplish by doing what he does. In short, there are big holes in this book.

In short, this was a waste of my time and money. Seriously. I know that there's a sequel coming out (or maybe it already has, I don't know). No way am I going to waste any more on Cadel Piggott. He's sucked up too much from me already.
Posted by John at 3:35 PM