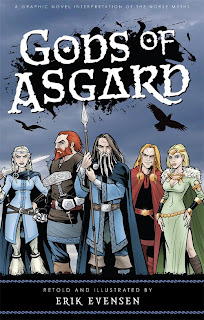 So recently, I was at the Great Minnesota Get-Together to see Weird Al Yankovic in concert and I had a little time to kill. So I headed over to the Heritage Square to look at the crafty vendors and see what they were selling. In one little shop, I spotted a graphic novel called Gods of Asgard by Erik Evensen. I flipped through it for a moment or two but put it back. Then, after heading out to look at other vendors, I came back and bought the book.

See, I'm familiar with Greek mythology. I've even read some Egyptian mythology in the past. But I'm not all that familiar with Norse mythology. Sure, I've read a Christian novel in the past few years that baptized aspects of Norse mythology. I've heard the term "Ragnarok" used at different times. There's an Odin, Thor, and Loki in Starcraft II. And, of course, there's the big Marvel blockbuster coming out next year. But I don't know much about the source material. I figured a graphic novel interpretation might be a good introduction tot he larger myths. Hence my purchase. And while I've flipped through the book occasionally since buying it, I didn't have a chance to sit down and read it until now.

By and large, the book did what it's supposed to do. Evensen's art is decent (although I'm not the best judge; I'm not that artistic, nor am I a connoisseur of comic book art). The stories are told crisply and simply with little explanation. In some notes at the end of the book, he explained that he chose to portray the gods and goddesses of Asgard as being very human, dressed simply, with little ornamentation to their costumes or residences. It worked quite well, especially given their all-too-human escapades. I especially appreciated the notes that Evensen included at the end, which explained some of his interpretive choices.

What frustrates me, though, is Loki. This is not Evensen's fault. It would appear that Loki's character underwent something of an evolution in Norse folklore, going from tricky blood brother of Odin to really mean and nasty jerk, the instigator of most of the gods' troubles. There's little explanation as to what changed and why he would suddenly help in the murder of Balder. I realize that Evensen, staying true to the source material, did his best but in terms of craft, the transition is jarring and perplexing. It makes me wonder what happened "behind the scenes" in terms of story to help explain why Loki changed so drastically. It also makes me wonder what kind of societal change brought about Loki's transformation within the Norse religion. Evensen mentions that some scholars think that the Norse concept of Ragnarok, the final battle between the gods and their enemies (aided and led by Loki, it would seem) was somehow influenced by Christianity and our concept of Armageddon. Evensen doesn't believe that to be true, but if it were, I wonder if the Norsemen hearing about a different "father of lies" started to merge Satan with Loki.

That's just a guess; I have no idea if that's true. In the end, Evensen's book was a good introduction but it's raised more questions for me. I may have to track down some more books and do some more reading, if only to see if I can figure out what Loki's problem is.
Posted by John at 4:41 PM