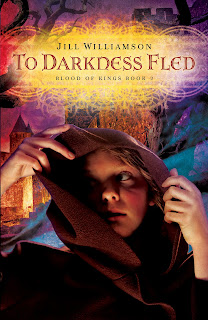 All I have to say is: this was well worth the wait, although the ending was bittersweet for me (I'll get into why in just a moment). I just now finished reading To Darkness Fled by Jill Williamson, the second book in the Blood of Kings trilogy.

When we last left our heroes, Achan Cham had found out that he is the rightful king of Er'rets and that his throne has been usurped by a jerk named Esek. Some of the lords of the land have sworn fealty to him but some powerful people have not. So Achan and his loyal knights must go on the run, fleeing into the Darkness that covers half the kingdom. They need to find allies and try to stay one step ahead of everyone.

Unknown to Achan is the fact that one of traveling companions isn't who he says he is. Achan knows him as Vrell Sparrow, but in reality, Vrell is a noblewoman dressed as a fourteen year old boy. Vrell was supposed to marry Esek in the first book, but instead, she went on the run.

Darkness around them, enemies within and without, can Achan and Vrell find what they're looking for? Can they find what they really need?

Like I said, I've been waiting a year to read this one. Williamson has done it again, putting together a captivating plot with tremendous characters who come alive on the page. She's created a fascinating world but is careful not to get herself (or the reader) too bogged down in it. There were new concepts and ideas popping up all throughout the book (especially relating to the telepathic bloodvoicing that many characters do) but all were introduced gently and logically. I did find it humorous that the old tongue is Biblical Hebrew.

Like the last book, there were plenty of twists and turns. There were even some places where I expected twists but never got one (which provided a wholly different sort of surprising twists). There were a few places where I was able to guess what was about to happen, but that never really bothered me. It was fun to watch things unfolding and Williamson never left me hanging for too long. If I figured it out early, the characters figured it out a few pages later, meaning I never once wanted to shout, "Oh, come on already!" (which sometimes happens when I'm reading).

All that being said, there were three minor things that bothered me, all relating to theology. First of all, there was the Bible quotations. In this fantasy world, we've been introduced to two members of the Trinity, Arman (standing in for God the Father) and Caan (standing in for God the Son). That's all well and good. Believers in Arman have their own holy writings, a Bible analogue in the story. Also good. The problem was that Williamson quoted from their holy writings and in almost every case, it was simply a quotation from our Bible, with the names changed.

Now if this only happened once in a while, I probably wouldn't have minded. But there were two different places where Williamson quoted a great deal of Scripture. For example, in the worship service in Melas, the priest got up and recited a pastiche of John 1 with smatterings of 1 John and other New Testament writings, almost word for word out of the Bible. It almost got to be too much, in my opinion.

Second were two minor theological quibbles I had with statements Williamson made. In one, Sir Gavin Lukos is talking to Vrell about a bloodvoicing ability called "storming." He says "A man's soul is not created for Er'Rets, you see. It was created for Shamayim and longs for the peace and joy of that eternal home." Keeping in mind that er'rets and shamayim are close to the Hebrew words for "earth" and "heaven," I would disagree. So would St. Paul in 1 Corinthians 15 and, I think, St. John in Revelation 21. God did create our soul for this world. Sin wrecked things, though, and death undoes the intended order of things. That's why Jesus will return to bring about a new heaven and a new earth, one to which we will all be resurrected. Like I said, it's a minor thing, but it bugged me for a while after I read that.

The other problem is one that's not unique to Williamson's book and it's probably a difference in our theological backgrounds. It's the whole concept of "be faithful enough to God and He will give you the desire of your heart." I don't really like anything that skirts too close to a health/wealth/happiness Gospel. I don't think that's Biblical. But again, it was a minor detail and didn't really detract from my overall enjoyment of this wonderful book.

So why was the ending so bittersweet? Well, it's not because of how Achan and Vrell wound up (and, I must say, bravo to Williamson for how deftly she keeps us on edge with all that). It's because, once again, I have to wait to find out how this all ends up. But I'm not too worried. Given what I've seen in the first two books, it will be worth the wait.
Posted by John at 10:09 PM