I think I'm completely out of the swing of things. So many books arrived for the blog tour that I lost my head somewhere along the way. When the book arrived for this tour, I pulled it out of its package and looked it. The author's name looked vaguely familiar. The cover art was pretty cool, what with a guy holding a sword. And I remember thinking, "Huh. This might be fun."

Then I read the back cover and I just about fell over. Raven's Ladder was written by Jeffrey Overstreet, which means that this is a continuation of the Auralia's Thread series. I've enjoyed the previous two books, namely Auralia's Colors and Cyndere's Midnight. So I couldn't wait to descend into the Expanse and see what Overstreet cooked up for us. 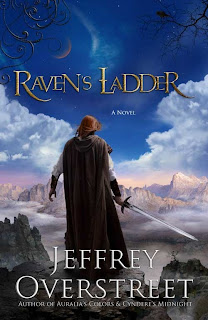 The survivors of House Abascar have been holding out in the mountains for months now and King Cal-Raven has decided that the time has come to find them a new home far to the north. But the journey will not be easy. A new horror is stirring from within the Cent Regus Core. More problematic, however, is the fact that the journey will take the survivors to the luxurious city of Bel Amica, a gilded cage from which they may not want to escape. Can Cal-Raven hold his people together and keep them united under the purpose of finding a new home? Or will they wind up absorbed by their neighbors and the Seers that control them?

To be honest, I think I've been away from Overstreet's world for too long. The first few chapters were a grind because I couldn't remember who was what and what was happening where and why and all that good stuff. In other words, I don't think this is a book that a newbie to the series could just pick up and enjoy. You'd have to read the first two books to really get a feel for what's going on.

But aside from that minor issue, after the first few chapters, I was back in the swing of things and I once again really enjoyed the story that Overstreet crafted. This time, looking at the opulence of Bel Amica was a sobering wake-up call about what people live for.

What I really liked was the ending kick. Overstreet included little twists at the end of his previous two books that kind of set things on their ear and this one is no exception. It especially makes me want to see what he has in store in the next book. And there'd better be a next book, because otherwise there's a huge dangling thread just waiting to be tied off.

I can't believe I just made that joke. No, actually, I take it back. I can.

Make sure you go and check out what the other tourists have to say:

Wow, you did a really good job of explaining the plot concisely. I found that difficult because, like you said--this is a complex story with a lot of characters and a lot going on. I actually reread the first two books before reading Raven's Ladder for exactly that reason. I agree that you can't just jump into the middle of this series. And I happen to know there is a fourth and final book coming--currently titled "The Ale Boy's Feast" :). Great review!

I can believe you made that pun.