This time around, we'll be considering Lost Mission by Athol Dickson. 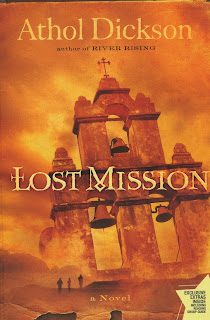 This book follows a variety of different character whose lives intersect and collide at different times and in many different ways. There's Lupe, a Mexican shop owner who decides to leave everything she knows to travel north to be a missionary to the Americans. There's Tucker, a young pastor who faces difficulty and hardship, not just because he creates a church to minister to the Latino community but also because of his personal choices. There's Delano, a wealthy Christian who allows his personal pain to spur him on to a supposedly grand plan. And threaded through all of their lives is Fray Alejandro, a Franciscan brother who lives four hundred years earlier. All of these characters are faced with hard choices and heavy consequences.

Dickson is definitely a talented writer, no doubt about it. It took me a while to appreciate that. He skillfully wove together each chapter, starting with Alejandro's time period and then thematically linking what the brother experienced with a character in modern times.

My initial reluctance regarding this book is more my problem than his. I reacted badly to his style; Dickson writes this book in a sort of detached manner with a sort of omniscient narrator handling most of the story. Plus every chapter contained a sort of mini-sermon. When I first started reading, the omniscient voice threw me and the mini-sermons kind of turned me off. I got used to the former and wound up skimming the latter.

But that's just me. I want to make that clear. And I did come to enjoy the story toward the middle and, by the end, I had to stay up late one night to finish reading it.

So would I recommend this book to other people? Sure. It's well written and in the end, it left me profoundly uncomfortable (and that's a good thing; it's one of those "afflict the comfortable" type of books).

Go and see what the other tourists had to say:

Good review, John. I was half way into Lost mission before getting hooked too. Dickson brought the two time periods and locales to life. I knew little about either before reading Lost Mission.

one of those "afflict the comfortable" type of books

That really sums it up, John. Great line.

I referred to the sections you called "sermons" as "contemplation," and once I realized that the contemplations were the transitions from the past to present, I liked them. I thought only one went on too long (unlike that by literary writers of classic status such as Herman Melville).

Looking forward to the rest of your posts, John.