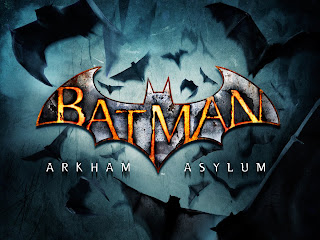 A few days ago I snagged the demo for Batman: Arkham Asylum off of Steam and late last night, I decided I would take it for a spin and see what the game was all about.

Wow. I am impressed with what I saw so far.

As near as I can tell, the overall story of the game revolves around (you guessed it) Arkham Asylum. Batman has returned the Joker to the Asylum, only to have Joker escape almost immediately. It turns out that Joker wanted to go back because he's set a trap for the Batman. Batman is trapped inside the Asylum with Joker in control of everything through his right hand gal, Harley Quinn. I'm guessing Batman will have to fight his way through the thugs and villains housed in the Asylum before squaring off with Joker himself.

First things first: the look. Gritty, grimy, and very realistic. I snagged this screenshot of Harley at one point just because I was so impressed (and I have a soft spot for Harley): 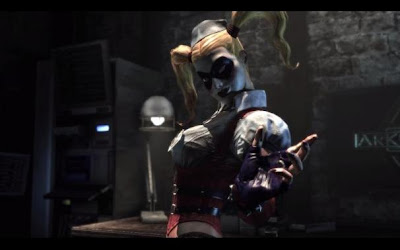 There's a definite dark feel to the game, which is only appropriate. And the voices! According to imdb, it's an all-star cast, all of whom have had experience playing their respective good guys and villains. I mean, you can't do much better than Kevin Conroy for Batman's voice. And while Heath Ledger is the best Joker I've ever seen hands-down, if you're going to have someone do the Clown Prince of Crime's voice, I'd go with Mark Hamill any day.

On to one of the things that Batman does best: fighting.

This was, perhaps, the greatest surprise for me. When Joker unleashed the first wave of thugs after me, the game prompted me to just left click. And I did. And my jaw promptly hit the floor.

I expected just a few simple punches. What I got was a gymnastic display worthy of the Caped Crusader. Flips, kicks, roundhouses, Batman did it all ... and only from left clicking! The game choreographed a spectacular fight just from me doing some button mashing.

This might actually be a drawback. There are a few special moves you can do that require more than left-clicking, but the fighting controls almost seem too simple. It was great late at night when my brain was half shut down, but when I'm more alert, I might want more of a challenge.

Of course, the challenge might grow through subsequent levels. This is a demo, after all, and there weren't any boss fights.

But there's more to Batman than just throw haymakers. I was able to use his grappling hook, take down a few thugs silently, and use "detective mode," which apparently is Batman activating some sort of sight overlay device in his cowl (think the infamous sonar mode from "Batman Forever," only not quite as stupid). That last one bugged me a bit, but I got used to it and switching between it and the regular view was seamless.

Having said that, there were a few things that bugged me.

One is pure aesthetics. For some reason, when Batman was walking, the camera moved so that Batman was on the left side of my screen. I'm used to games like this having the main character dead center on the screen and it made navigating a bit tricky at first. I don't know why you'd do something like that. Maybe there's a way to fix it.

The second was the fact I could tell that this was a cross-platform game. It's easy to tell from throwing the batarangs. Just get the aiming reticle near your target, then lock-on with a mouse click before you throw. It's pretty obvious the system was designed primarily for systems that don't have a mouse. Not insurmountable, just a minor annoyance.

So overall, I liked it. I'm not planning on buying it right away when it comes out in September. I'll be at the ACFW Conference in Denver in September and my discretionary entertainment budget is earmarked for lots and lots of books. But I think I'll be chasing Joker through Arkham Asylum again at some point. I can't wait for the hunt.
Posted by John at 11:09 AM