There's a Zombie on your lawn!

Okay, so about this time last week, I was extremely depressed. My computer had to go into Best Buy for servicing. Bad timing, since The Sims 3 was coming out the very next day and I had been looking forward to playing that for a long time. But since the computer was acting so slow, I knew it had to be done. So off it went. For three or four days.

That posed quite a problem for me. I'm a gamer and I had no way of playing games. I would bring my laptop home from work but that was only good for checking e-mails and browsing the web. By Thursday, I was getting desperate. I had to play something.

Well, I knew that while my laptop could not handle the graphics load from The Sims 3, it could handle a casual game. And an on-line friend of mine had been playing this game, so much so that he posted a weird music video about it. I finally decided I had to check this game out for myself.

So I downloaded the free trial. Once the hour was up, I immediately bought the game. And even though the computer came back and I could finally play The Sims 3, I found I preferred to play this silly little casual game instead.

What is this remarkable game? Plants vs. Zombies.

Just a quick note: the above video is not the music video that enticed me to play the game. It's the official trailer, but you still get the idea.

Part of the reason why this game is such a blast is because it's so deceptively simple. Zombies are trying to invade your house. Your only line of defense are your plants. Set up your defenses as best you can and try to survive wave after wave of the shuffling undead.

But this is a PopCap game, and PopCap really knows how to make addictive games. With each successive levels, you get more and more plants to take out more and more powerful zombies. Part of the strategy is figuring out what plants you need to face what zombies. If you don't have the right plants, you're going to be facing a difficult battle. 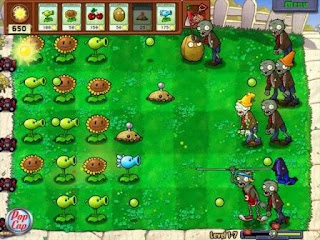 Even though I've beaten the "adventure mode," I'm still playing the game obsessively because (and here's the true genius of this game), there are dozens of mini-games and puzzles to solve, each ridiculous, each hilarious.

So if you're a fan of casual games or just want to play this game to see the aforementioned music video, you can't go wrong with this one.
Posted by John at 11:01 AM

I love this game. :) So much to do with all the different ways to play (adventure, puzzles, challenges, zen garden).

Not terribly challenging, but a great way to blow off some steam and wind down.

Though I hate zombies the way the guy in that movie hates mummies, I would be sorely tempted if I weren't currently obsessed with the game Virtual Families, from the makers of the Virtual Villagers series. I may actually be able to hold off trying the zombie game until, say, tomorrow.