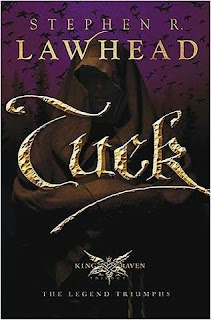 Holy cow! Is it time for the blog tour already? You'd think I'd be on top of this more since this month's book was particularly fantastic. We're delving into the final book in the King Raven trilogy, namely Tuck by Stephen Lawhead.

The book picks up where the previous volume, Scarlet, leaves off. Rhi Bran and his Grellon have been betrayed by King William. Rather than giving Bran his throne back as promised, William has turned Elfael over to Abbot Hugo and his cronies. Rhi Bran sees no other choice but to go to war against the Ffreinc. But some of his subjects aren't completely sold on the idea. Merian, for one, feels the best thing for her to do is to return home and enlist the aid of her father. And Friar Tuck, while supportive of all of Bran's schemes, doesn't feel that full-on war is the best solution either. But with war brewing between the Cymry and the Ffreinc, can Tuck's voice be heard?

I said this back when I reviewed Scarlet, but I'm not exactly a dyed-in-the-wool Lawhead fan. Some of his books haven't sat all that well with me. But I've been hooked by the King Raven trilogy. I've loved the retelling of the Robin Hood myth in a different time period than we're used to. Making him a Welsh rebel as opposed to a happy-go-lucky thief worked very well. There was a great deal of grit and realism to the story and I could easily believe that this is the way that it happened.

Lawhead infuses his story with an number of twists and turns and clever strategems throughout. The only "low note" for me was the way things ended. It was almost a deus ex machina, but here's the screwy thing: it really worked for the story, especially since the majority of this tale was told from the perspective of Friar Tuck. This is Tuck's story, so given that, it makes sense that the story ended the way that it ended. So while things were a bit abrupt, it completely fit with the overall story and actually had me laughing a bit.

So if you're a fan of historical books, or if you want to see a great retelling of the Robin Hood stories from a new perspective, you can't go wrong with learning about Rhi Bran y Hud.

Go and see what the other tourists have on their minds:

Until this trilogy, I haven't been a Lawhead reader, either, but not for lack of trying.

However, I really enjoyed these books (especially Scarlet), and the updating works for the legend. Good stuff!

This trilogy captured me, too, but I've long been a Robin Hood fan. In fact, any story with an underdog hero, hiding from and fooling the opposition (Zorro, Superman, Spiderman) has me.