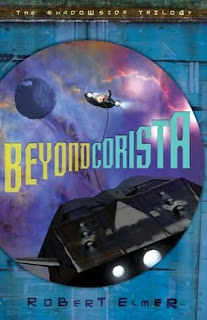 Beyond Corista by Robert Elmer is the third book in The Shadowside Trilogy. It tells the story of Oriannon Hightower, a young woman from a plant named Corista. The story starts with her and her friends on the run from Coristan security. They've apparently stolen a shuttle and managed to kidnap the planet's despotic dictator. But a new threat has invaded their system, one that has destroyed an asylum station. Now Ori has been sent on a mission to warn the other stations. The mission was given to her by Jesmet, her former mentor who apparently died and came back to life. Can Ori fulfill her mission? Can she warn the other asylum stations of the on-coming Troikan threat?

I had a bit of a problem getting into this book, but that's because it is the third book of a trilogy and I haven't read the first two. I got the feeling that the second book ended on a high point and Beyond Corista picked up where it left off. At the same time, figuring out the events from the first two books (or the relevant parts) isn't that difficult. Elmer makes sufficient reference to them that a reader could conceivably pick this book up and follow the action. But I think it would probably be better to read the other books first. I suspect that the story would fit a bit better in its larger context.

Elmer's worlds and creatures are very interesting. Wist the Owling, Alymas the Translucent, the Makabi, and especially the Troikans, are colorful and fascinating. The Troikans especially intrigued me. The fact that the planet Corista seems to have a slower rotation than Earth's fascinated me as well. I can only guess about that; this didn't really come into play in this book.

My only real complaint is the way the book ended. It didn't have a whole lot of finality, especially as the final book in a trilogy. It seemed more like Elmer was leaving things open for a fourth book. Maybe there will be one. But given that this was a trilogy, I thought a slightly "punchier" ending would have been better. That's probably just my own taste, though.

So it's a good book, definitely worth a read, especially if you know any young sci-fi fans.