CSFF Blog Tour: The Book of Names Day One 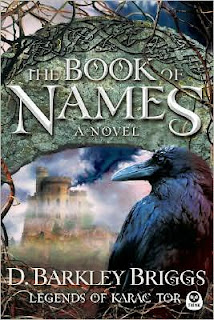 It's the story of the Barlow brothers. They've recently moved to a small farm in Missouri with their professor father. The transition is a difficult one, but Hadyn and Ewan, the two older brothers, discover a strange runestone, one that transports them to a place called Karac Tor. They're told that they could be heroes summoned to help a troubled land. For a mighty sorceress is stealing the names of young people in attempt to unleash a great evil. Will Hadyn and Ewan be able to find their way home again, or will they be consumed by the ever growing evil?

It took me a while to get into this book. I don't know why that is, but once I did, it was worth it. Briggs crafts a rich world with a fascinating spiritual hierarchy (the Whites, the Blacks, and the Grays). His characters are fun to follow, especially as Hadyn and Ewan learn that they have special abilities in Karac Tor.

Personally, my favorite character is Cruedwyn Creed, a swashbuckling warrior with a rather interesting blade. He always kept me laughing to the very end.

It's definitely worth a read. I know I'm looking forward to the next book in the series, Corus the Champion.

Go and check out what the rest of the tourists have to say:

I thought I was just being too nitpicky, but it's good to know I wasn't the only one who had difficulty getting into the story. However, the rewards are for those who persevere.