I've been looking forward to this one for a while now, ever since Matt Mikalatos hinted at it back during the Imaginary Jesus blog tour. He had me at "Lutheran werewolf." I couldn't wait to find out what this new story would be about.

It turns out that Night of the Living Dead Christian is an excellent theological romp through a horror movie parody. My goodness, that's an odd way to describe a book, isn't it? And yet it fits. 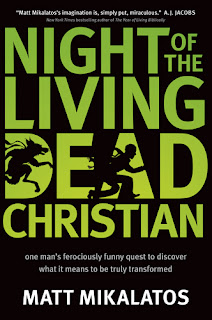 Just as in his first book, Mikilatos is the star of his story. It starts with Mikilatos on patrol as part of his neighborhood watch. He discovers a mad scientist and his android companion rigging up some sort of experiment to a streetlight. When activated, this brings a swarm of zombies into the neighborhood. They're being chased by a werewolf. Soon Matt finds himself caught up in a quest to help the werewolf (who turns out to be his neighbor, Luther Martin) become fully human and fully alive. Along the way, they encounter more zombies, a recovering vampire, and enough silly scenes to keep me laughing the whole way through. But at the same time, it left me thinking. In short, it's a great book because it not only entertains, but it makes you wonder: how alive am I in the faith?

Truth be told, I was both worried and delighted that one of the main characters would be a Lutheran. We're an underrepresented bunch in Christian fiction and I always love it when we show up in some way, shape, or form. But at the same time, I wondered what would happen with this Lutheran werewolf. Would Mikilatos get the theology right?

For the most part, I think he did. I did wince at the description of Luther's interactions with his father. I know it was hyperbole, but let me assure you, most Lutherans aren't quite as fanatical as Luther's descriptions of his dear old dad. Some, maybe, but that's another subject for another day. And, for the most part, Mikilatos nailed the theology pretty much spot on (although I did have a little quibble with something that happened in the epilogue, but it's so minor that it's really not worth mentioning).

On the back cover, Relevant Magazine described Matt Mikilatos's writings as "Monty Python meets C. S. Lewis." I think that's an apt description. It's a fun read, but just as deep as anything Lewis might have concocted. After reading two of Mikilatos's books, I'm a devoted fan. I can't wait to see what he comes up with next.

Go check out what the other tourists have to say:

Good post, John. I was particularly wondering what our resident Lutheran pastor thought. Glad you liked it.

I really like your description of "theological romp through a horror movie parody." And it was excellent. As a non-Lutheran I didn't attribute Luther's interactions with his dad to Lutherans as a whole. Admittedly I don't know a whole lot about my Lutheran brethren. I am curious about your quibble though.

I'll agree with Shane--I actually didn't see many of Luther's actions as being NECESSARILY Lutheran--the Lutherans I know (and they describe themselves as Christians, not Lutherans) don't have the questioning/doubting/intellectual nature of Luther, so I assumed most of his beliefs and personality came from his father, not necessarily being Lutheran.

Except for the Reformation Day hangup. :)

I'm so pleased you enjoyed the book.

On the Lutheran front: I struggled with the issue you mention in the epilogue. In fact, at one point my editor and I talked seriously about having the "Matt" character take the father's role in the epilogue, but I felt the emotional payoff was more important than being exactly correct on what a Lutheran minister might do in that situation... and I thought that those "in the know" would see it as another evidence of the Reverend's love for his son.

As for the minister's extreme nature... I hope that it was at least partially clear by the end that perhaps Luther's memories of childhood were what were hyperbolic, not just the descriptions but also the events as he remembers them. Or at least that the minister has grown and changed since then, as he seems to have helped Lara further along the path pretty well.

Also, I would like to say that my editor forced me to drop A LOT of Lutheran jokes, which I think in general Lutherans would have enjoyed and found affectionate and good natured. But my editor thought not. :)

Lastly... I really do have a guy in my neighborhood who puts up a NO HALLOWEEN HERE HAPPY REFORMATION DAY sign in his yard. Every year. You can't make that good stuff up. On the other hand, one of my Lutheran friends who used to live two streets down from us handed our candy on Halloween and gave my kids two pieces if they remembered to say "Happy Reformation Day" when they came to his house.

Great review. I was a bit worried at the description of the interaction with the father and I'm a Baptist! But, it was spot on and it was this truthfulness played against the humor that made it all the more real.

No worries about the epilogue. I figured that was what was going on. The same with the father's extreme personality. I figured that Luther was being an "unreliable narrator" at that point and engaging in a little hyperbole.

As for the Lutheran jokes, I'm disappointed you couldn't keep them in. Want to send them to me? ;D